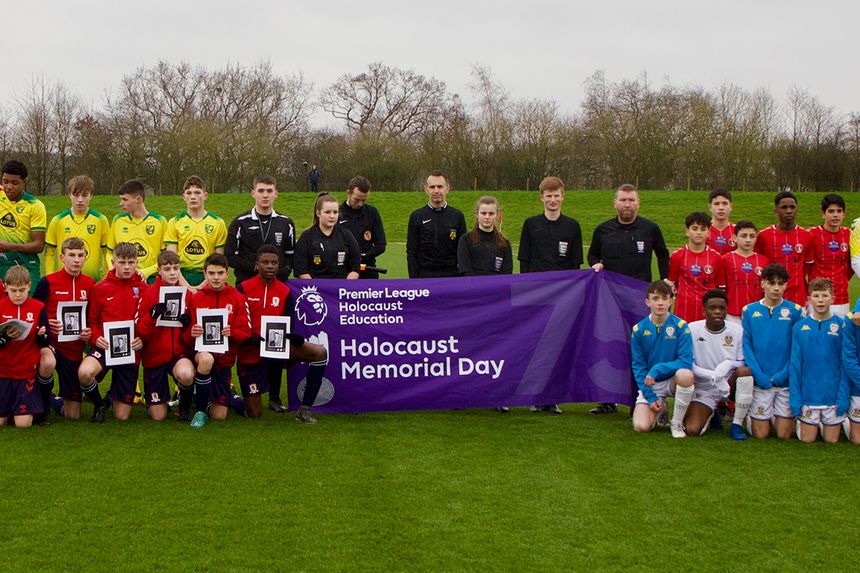 Premier League Academies are marking this year's Holocaust Memorial Day with a series of educational events and tributes around matchdays.

The day, which marks the anniversary of the liberation of Auschwitz-Birkenau, the largest Nazi death camp, remembers the six million Jewish men, women and children who were killed in the Holocaust between 1941 and 1945.

It also commemorates the millions murdered in subsequent genocides, such as in Cambodia, Rwanda, Bosnia and Darfur.

The Premier League's Education Department has formed a close partnership with the Holocaust Educational Trust to help the educational and welfare development of Academy players, who are taught about the horrors of the Holocaust.

As part of this work, scholars from Manchester City and Manchester United who have been working on projects about the Holocaust had a virtual meeting this week with Holocaust survivor Joanna Millan BEM, who shared her experiences of the death camp with the young players.

"It is essential that we continue to have these conversations so we can teach our future generations about the Holocaust and honour the millions of lost lives," said Mark Adams, Manchester City Academy's head of education.

Man Utd education officer Wayne Cahill added: "The event truly brought our project to life and enabled our Under-14s to understand the personal impact of the subjects they have been learning about."

Academies are also remembering Jozsef Braun, one of Hungary's best-ever players, who died of exhaustion and malnutrition while held as a slave labourer by the Nazis.

This weekend, Academy players will mark Holocaust Memorial Day at 10 Under-14 fixtures, where they will wear special stickers on their shirts, while ahead of kick-off they will commemorate Braun and other victims of the Holocaust.

As we mark #HolocaustMemorialDay, members of our Academy met Eric, a survivor of the Rwandan genocide.

Join us as we stand against hatred, and light a candle in your window at 8pm to remember those who have lost their lives to genocide.#CPFC | #LightTheDarkness