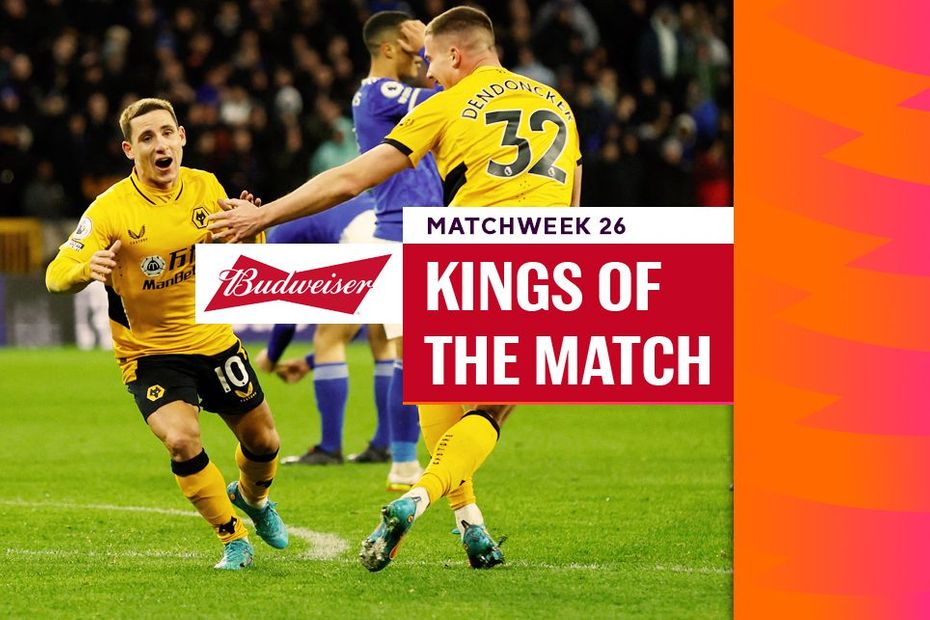 See which players have earned the backing of supporters, including Wolves' Daniel Podence

Shearer: Wolves have a great mentality

After the final whistles in Matchweek 26 of 2021/22, thousands of supporters have voted to crown their Budweiser Kings of the Match.

See who has come out on top so far, ahead of the midweek matches, and click on the results below to find out how the voting has gone.

He was a constant threat and scored his first goal of the season to equalise for Newcastle United.

Dennis's powerful header, his ninth league goal of the campaign, earned Watford a vital victory in their battle for safety.

The towering striker scored his first Burnley goal with a superb strike before creating the second in an impressive showing.

It was another solid display from the Chelsea defender, who helped his side leave Selhurst Park with all three points and a clean sheet.

The Egyptian scored his 17th Premier League goal of the season as Liverpool came from behind, earning him a huge 76 per cent of the vote.

The Southampton defender helped his side to a clean sheet in their win, which made it four matches unbeaten for Ralph Hasenhuttl's team.

The striker scored twice, including a last gasp-winner, as Tottenham Hotspur won a five-goal thriller at the reigning champions. He took almost two-thirds of the vote.

He netted his first goal of the season to secure victory and boost Wolverhampton Wanderers’ hopes of European qualification.

The Burnley captain led by example, heading in the only goal to secure a second successive league win.

Two late goals capped an impressive display from the Eagles talisman as he helped his side return to winning ways.

The Egyptian took the vote for yet another week after scoring twice and creating another as Liverpool put six past Leeds United.

Earned just under half of the vote after the striker's movement and shot forced a stoppage-time winner against Wolves.