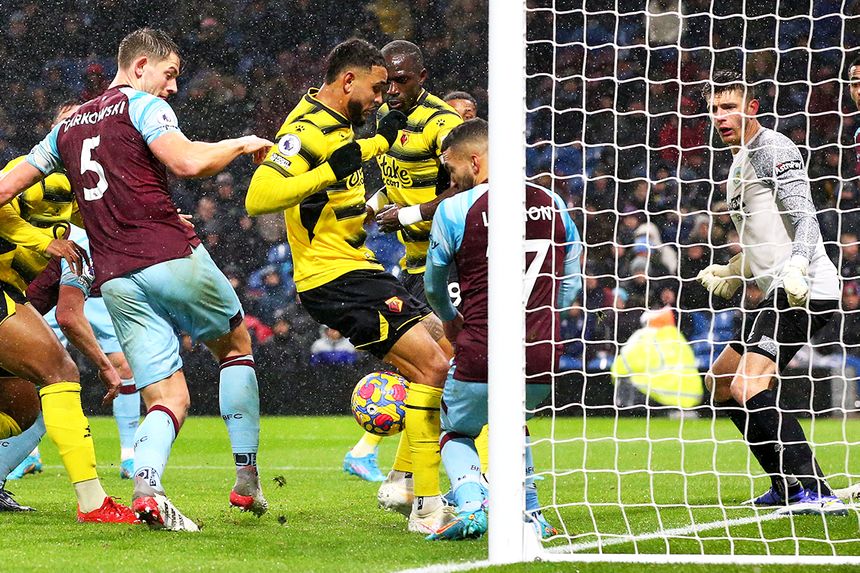 FPL team news: Lampard updates on Gray and Mina injuries
FPL Show: Should you bring back Salah in GW24?
Must-have FPL picks for the rest of 2021/22

More than two million Fantasy Premier League managers, including most of the top 100 in the world, suffered frustration by their captaincy choices in Gameweek 23.

Watford forward Joshua King (£5.9m), the joint-most captained player in the top 100 along with Emmanuel Dennis (£6.2m), blanked for the second time in their Double Gameweek 23 and picked up a yellow card in Saturday's 0-0 draw at Burnley.

That came after Dennis was sent off for two bookings as Watford started Gameweek 23 with a 3-0 home defeat by Norwich City.

Kevin De Bruyne (£12.2m) was the only one of the popular captains among those ranked in the top 100 to deliver, providing an assist and claiming all three bonus points in Manchester City's 1-1 draw at Southampton.

De Bruyne's team-mate Phil Foden (£8.0m) was also a differential pick in the elite group, but only the Belgian rewarded his owners.

Dennis was the most-captained active player, with 1.2m managers handing him the armband.

But the Nigerian picked up -1 points, or -2 for those who captained him.

Dennis, who was also the most Triple-Captained player with more than 18,000 backers, was subsequently banned for the trip to Burnley.

The 955,000+ who backed him with the armband would have been happy to see him overcome a neck problem to start for Manchester United against West Ham United but the forward provided only two points in the 1-0 win. Ronaldo has now blanked for a third start in a row.

De Bruyne, captained by 530,000+, was also the only player to profit among the top captains overall.

Philippe Coutinho (£7.0m) was snapped up by more than 705,000 managers after his successful Aston Villa debut last weekend, but the Brazilian blanked despite being named in the starting XI and playing 73 minutes in the 1-0 win at Everton.

Diogo Jota (£8.4m) completed the top three transfer targets along with De Bruyne. Over 351,000 bought the Portuguese as gained an FPL assist after being fouled for a penalty converted by Fabinho (£5.4m) in Liverpool's 3-1 win at Crystal Palace.

Jota ranks second among all players for shots in the box this term, with 53. Only the absent Mohamed Salah (£12.7m) has registered more, with 66.

Joining Salah among the most-sold players were Son Heung-min (£10.6m) and Reece James (£6.2m). All three were without a match this Gameweek.

Salah is taking part in the Africa Cup of Nations, while injuries to Son and James mean they won't return until next month.