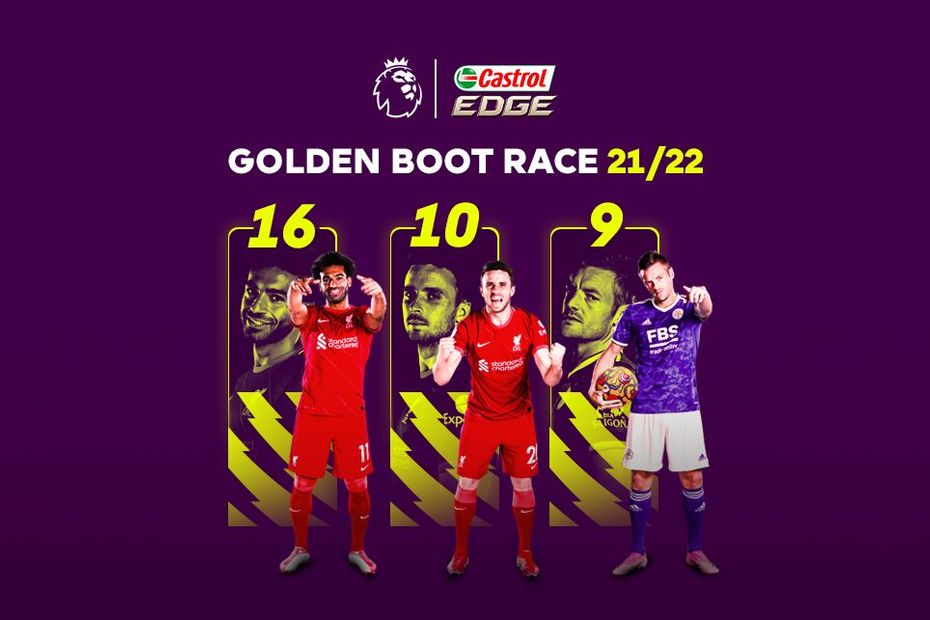 We look at the fight to win the Castrol award for top scorer, with rivals looking to close in on Liverpool star

A phenomenal first half to the season has put Mohamed Salah in the driving seat to win a third Castrol Golden Boot award as the Premier League's top scorer by a clear margin.

The Liverpool star holds a six-goal advantage over team-mate Diogo Jota, with Jamie Vardy a further goal back.

But Salah's participation at the Africa Cup of Nations (AFCON) has given the chasing pack the opportunity to reduce the Egyptian's lead. It also hurts his chances of reaching 30 goals in a season for the second time.

With Sadio Mane also at AFCON representing Senegal, the onus on Jota to lead Liverpool's attack is bigger than ever as he enjoys his best-ever goalscoring season in the competition.

Jota next faces a trip to Crystal Palace before playing Leicester City at Anfield in Gameweek 24. The Foxes are the only team to have kept a clean sheet against the Reds this season.

The hopes that Vardy had of picking up a second Golden Boot award, having won it in 2019/20, have been hit by a hamstring injury that is set to rule him out for up to eight weeks.

Of the seven players all tied on eight goals, Emmanuel Dennis looks to have the best short-term fixtures.

The Watford forward next faces Norwich City and Burnley, who both sit just below the Hornets in the bottom three.

Michail Antonio has returned to form of late, scoring two goals in his last four appearances for West Ham United.

There is strong pedigree elsewhere in the rest of the chasing pack on eight goals.

Both have netted four times in their last six matches, although Spurs head coach Antonio Conte has now confirmed Son will be out with an injury for a couple of week.