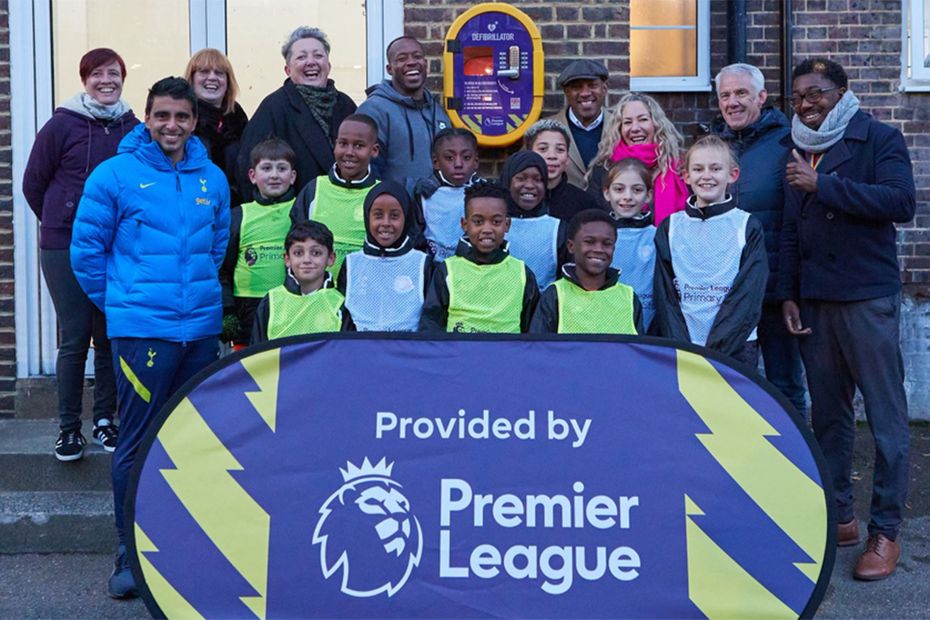 'Installing defibs and learning CPR can save lives'
Ugo Ehiogu pitch will help London kids all year round
Muamba: Defibrillators for grassroots clubs so important

The Premier League has provided an Automated External Defibrillator (AED) for the Ugo Ehiogu Mini Pitch at Seven Sisters Primary School in Haringey, North London, to give those who use the facilities throughout the week access to life-saving equipment.

The school received the free AED after applying via the Premier League's Defibrillator Fund, which will provide more than 2,000 life-saving devices to grassroots and community club facilities across England and Wales, benefiting up to 1.5million people.

The pitch is named in honour of ex-Premier League player Ugo Ehiogu, who sadly passed away in April 2017 due to a sudden cardiac arrest while working as a youth coach at Tottenham Hotspur. It is in regular use during and outside school hours, with community activity hosted there, including Premier League Kicks sessions delivered by the Tottenham Hotspur Foundation.

To mark the installation of the defibrillator, Spurs doctor Ravi Gill delivered a CPR workshop alongside Steve Quinton, from The FA, for the school's Year 6 pupils. Gemma Ehiogu, Ugo's widow, also attended and was joined by former top-flight referee Chris Foy and ex-Premier League player Dion Dublin at the event.

"Through our Defibrillator Fund, we have been installing life-saving devices at grassroots facilities throughout the country since the summer," said Premier League Chief Executive Richard Masters.

"These venues are hubs of their local communities, hosting sessions for people of all ages week in, week out. The welfare of everyone involved in football is a priority for us and having defibrillators on-site, and providing training for using them, could make all the difference should somebody suffer a cardiac arrest."

How to apply for a free AED

Grassroots clubs who own their facilities can head to the Football Foundation website to check their eligibility for an AED.

Once done, clubs can place their order through premierleaguedefibs.org.

"For people to have access to defibrillators, to know where they are and to be trained in CPR, it can only be a positive thing"

"Losing Ugo was the biggest bolt from the blue for us and it touched our lives hugely," said Gemma. "Ugo was fit and healthy but, tragically, you can read cases in the newspapers regularly of other people who have lost loved ones. Sadly, you just don't know when someone can be affected by cardiac arrest.

"The Premier League Defibrillator Fund is providing life-saving equipment for the grassroots football community and bringing awareness to this. If these actions could save just one person, it would be worth it. For people to have access to defibrillators, to know where they are and to be trained in CPR, it can only be a positive thing.

"The Ugo Ehiogu football pitch is an amazing facility for local children to use and enjoy and blow off steam. I'm very proud to see that the pitch has now been fitted with a defibrillator device."

At least 12 young people aged between 12 and 35 die of undiagnosed cardiac conditions in the UK every week. Over 30,000 people of all ages suffer a cardiac arrest outside of hospital every year and fewer than one in 10 survive.

"Defibrillators can save lives in emergencies," Gill said. "Sadly, cases of sudden cardiac arrest can happen anywhere and at any time so by enabling more facilities to have a device, it can make the difference in saving lives."

See: 'Defibs and CPR can save lives'

Dublin was a close friend and former team-mate of Ugo at Aston Villa.

"What is important is that with access to defibrillator devices provided by the Premier League and by learning CPR, we are doing what we can to save more lives in future," he said.

Seven Sisters head Emma Murray spoke of the positive impact the defibrillator will have.

"The Premier League providing a defibrillator here offers protection to our pupils and within the community. We're proud to make learning CPR a part of the education programme for our school," she said.

The Ugo Ehiogu Mini Pitch was opened in May 2019 after more than £100,000 of investment from the Premier League, The FA and Government via the Football Foundation. Partnership funding came from Seven Sisters Primary School and Side-On, the charity set up in Ugo’s memory.

"Football is such a huge part of our community, so having the pitch at the school has been great for both our pupils and other people in the area who can access and play sport in a safe environment," Murray said.

All devices supplied by the Defibrillator Fund are registered with the British Heart Foundation's centralised network, The Circuit.

The charity is encouraging the registration of all devices at thecircuit.uk.