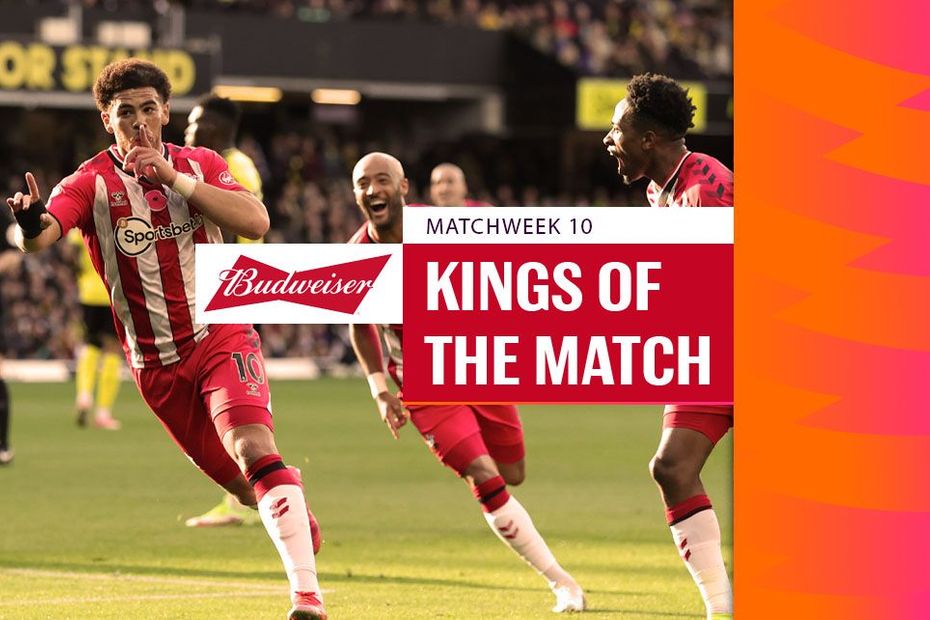 Adams: We need to build on this External Link

Hasenhüttl: We are getting stronger External Link
McManaman: Ramsdale produced a special display

After the final whistles in Matchweek 10 of 2021/22, thousands of supporters voted to crown their Budweiser Kings of the Match.

Made eight saves including a terrific stop in the first half to extend Arsenal's unbeaten run to seven matches.

The Burnley defender scored the second goal in their first win of the season. He polled 38.7 per cent of the vote.

The Egyptian took the vote for yet another week after creating the opening goal for his side in their draw with Brighton & Hove Albion.

The Crystal Palace midfielder put in an all-action display, as he created the first goal and then scored his side's second at Manchester City to take the vote.

Two emphatic finishes from the Chelsea defender set his side on their way to victory as they extended their lead at the top.

The Southampton striker ended his wait for a first Premier League goal of the season to ensure victory at Vicarage Road.

A superb goal from the Portuguese and an assist helped Manchester United return to winning ways and go fifth.

The Brazilian polled a huge 75.8 per cent of the vote after hitting Leeds United's first goal as they edged past Norwich City.

West Ham United's captain again led by example, scoring one goal and creating another as they cruised to victory at Villa Park.

The striker scored a sumptuous chip as Wolverhampton Wanderers beat Everton to climb to seventh, earning over 60 per cent of the vote.