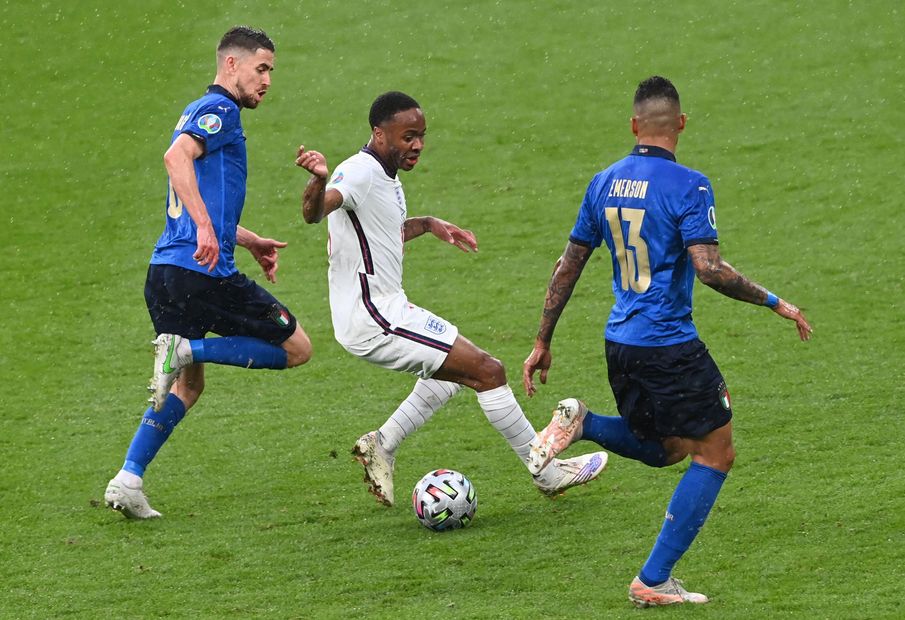 Jorginho, Sterling and Phillips among players to outperform their peers on international stage

Premier League stars shone for their nations this summer as a total of 23 players contracted to 2021/22 clubs made it to the final of UEFA Euro 2020.

Four of those were named in UEFA's Team of the Tournament, with Kyle Walker, Harry Maguire, Jorginho and Raheem Sterling all receiving that honour, plus semi-finalist Pierre-Emile Hojbjerg of Tottenham Hotspur and Denmark.

While the tournament ended in heartbreak for the 21 English Premier League representatives, it was one to remember for Italian duo Jorginho and Emerson of Chelsea.

Italy's penalty-shootout win capped off an incredible tournament in particular for Jorginho, who led the way for a number of statistics.

Jorginho made the joint-most ball recoveries (46), won the most fouls (18), played the most minutes of any outfield player (705), and set a record for the most interceptions made at a single European Championship tournament (25) since such data became available in 1980.

At 86.6 kilometres, Jorginho also covered more distance than any other player in the competition, narrowly ahead of another star of the tournament in Kalvin Phillips.

The England and Leeds United midfielder travelled 83km, as well as winning the joint-most tackles of all players, being successful with nine of his 13 attempts.

Phillips was not the only England player to lead the way among his peers.

Goalkeeper Jordan Pickford kept the most clean sheets of the tournament, with five, while Sterling showcased his skills by completing more dribbles than any other player. His total of 34 was eight more than that of France forward Kylian Mbappe.

With four goals, Harry Kane narrowly missed out on being the current holder of each of the Premier League, FIFA World Cup and European Championship Golden Boots.

Kane scored the most headed goals, with two, while only one player could better the three assists of his Spurs team-mate Hojbjerg and Manchester United defender Luke Shaw.

Despite being knocked out in the semi-finals, Spain and Manchester City defender Aymeric Laporte completed the most passes of the tournament. His total of 658 was a huge 161 more than the next-best player, Jorginho.