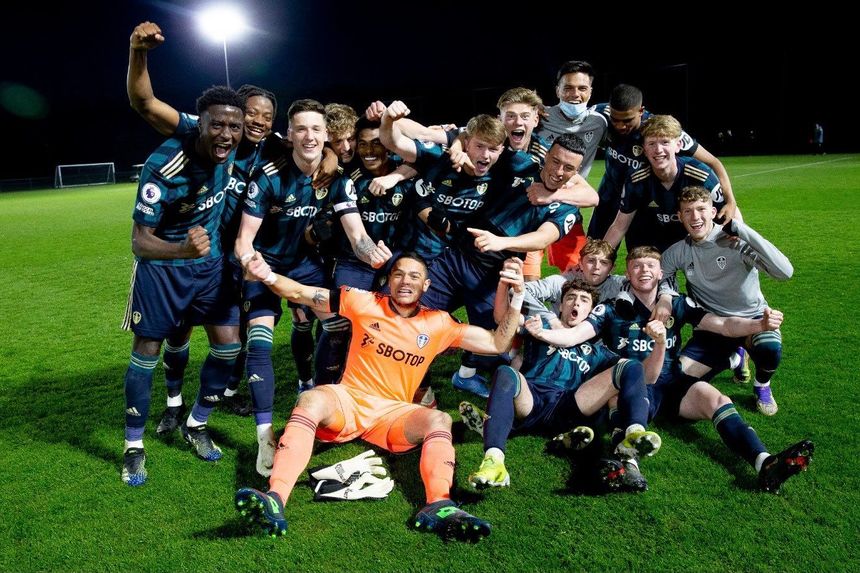 Sam Greenwood and Jack Jenkins scored as Leeds United secured top spot and promotion from Premier League 2 Division 2 with a 2-1 victory at Aston Villa on Friday.

Greenwood was in a hurry to wrap up the title as he scored a free-kick in the fourth minute, while Jenkins doubled the lead at close range just before the hour-mark.

Leeds were reduced to 10 men after Charlie Cresswell's second booking 14 minutes from time, and Villa's Aaron Ramsey - March's PL2 Player of the Month - pulled a goal back in the 85th minute. But the hosts could not spoil the promotion party.

In their inaugural season in the competition, Leeds have secured the only automatic promotion place with two fixtures to play, having won 17 of their 22 matches, including their last four in a row.

"That’s what we wanted," Leeds head coach Mark Jackson told the club's official website. "The club achieved Category One status and progressed into the league we are in now, so that is the next step.

“As a club, at every level we want to grow and play against the best opposition. Ultimately, when players play against better opposition and the best in the country, they are going to get better."

The four teams who finish behind Leeds will qualify for the promotion playoffs, and Burnley boosted their position on Friday.

Dara Costelloe set up both goals for Max Thompson as the Clarets won 2-0 at Reading and moved up to third. But all of the teams behind them have at least two matches in hand.

Middlesbrough are also on the rise, winning back-to-back matches to go into the top five after Joseph Gibson's goal in a 1-0 home win over Fulham.

Sunderland are only a point outside the playoffs after edging a five-goal thriller at Norwich City with a stoppage-time winner.

The Black Cats were trailing 2-1 after 70 minutes, but Josh Hawkes equalised with his second goal of the match and Daniel Neil completed the turnaround at the death.

In Division 1, Manchester City are within touching distance of the title after Friday's 3-0 home win over Manchester United.

Cole Palmer netted twice after Samuel Edozie's opener, and City will be crowned champions with three fixtures still to play if Blackburn Rovers and Tottenham Hotspur both drop points against Liverpool and Chelsea respectively this weekend.