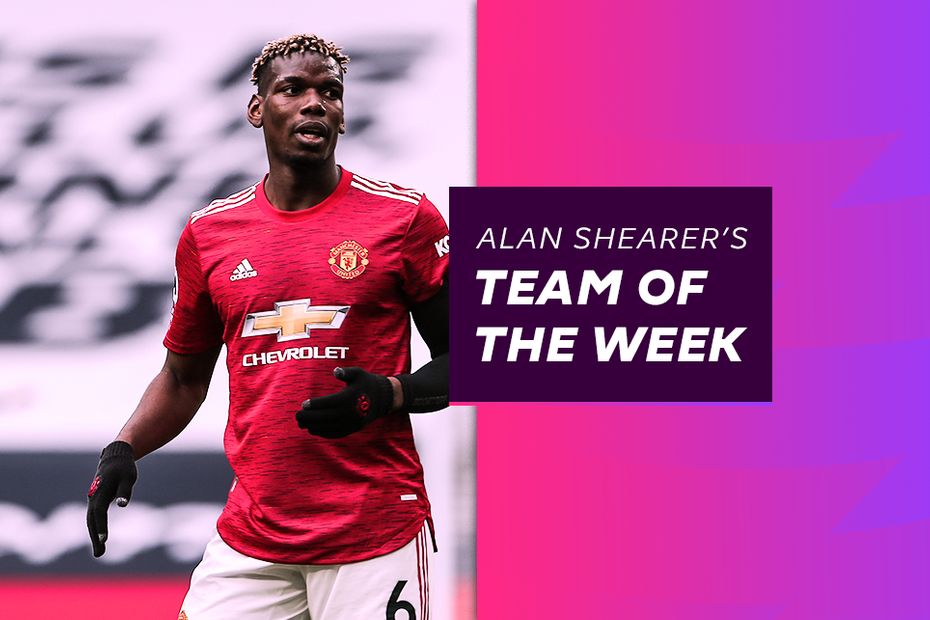 Cavani or Pogba? Our Man of the Match was... External Link
Shearer: Saint-Maximin made Newcastle a different team
Budweiser Kings of the Match: Matchweek 31

Paul Pogba may not have been on the scoresheet at Tottenham Hotspur on Sunday but, for Alan Shearer, the Frenchman's influence in Manchester United's 3-1 victory was clear for all to see.

Pogba nearly scored when his audacious flicked effort was blocked and then showed off his skill, strength and poise to set up his side's third goal, capping a performance that has earned him a place in Shearer's Team of the Week.

Would you make any changes? 🔄 pic.twitter.com/5NH49d0PBu

Martin Dubravka (NEW) BUR 1-2 NEW
"He was outstanding, making a crucial save when his team were 1-0 down and helping his defenders handle Burnley’s crosses."

Trent Alexander-Arnold (LIV) LIV 2-1 AVL
"Came up with the decisive moment of quality just when Liverpool needed it. That's a big goal in the top-four fight."

Diego Llorente (LEE) MCI 1-2 LEE
"He gave nothing away, stopping so many Manchester City moves."

Kurt Zouma (CHE) CRY 1-4 CHE
"Very solid at the back and scored another goal, his fifth of the season."

Stuart Dallas (LEE) MCI 1-2 LEE
"Wow. Outstanding. After helping to defend with 10 men for so long, he somehow still had the energy to run through and score the winner."

Paul Pogba (MUN) TOT 1-3 MUN
"When he plays like that he’s unplayable, as he showed for the final goal as he waltzed past Pierre-Emile Hojbjerg, shrugged off Eric Dier and played in Mason Greenwood."

Alexandre Lacazette (ARS) SHU 0-3 ARS
"He now has 50 PL goals after his two over the weekend. His first strike in particular was great to watch, with his role in the build-up as well as the finish."

Allan Saint-Maximin (NEW) BUR 1-2 NEW
"A goal and an assist. Welcome back. He changed and won the game for Newcastle United when he came on."