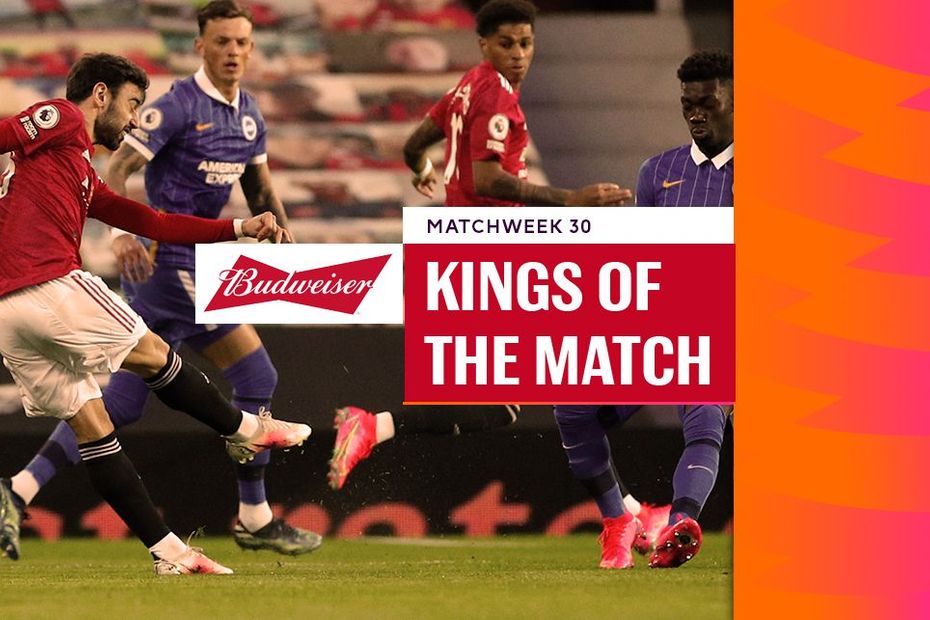 See which players earned the backing of supporters, including Bruno Fernandes

Supporters voted in their thousands to crown their Budweiser Kings of the Match in Matchweek 30.

The Brazilian scored twice and assisted two other goals in West Bromwich Albion's impressive victory to take almost two-thirds of the vote.

The Leeds United winger was at his creative best once more as he set up Jack Harrison's opening goal. Like his countryman Pereira, he took over 60 per cent of the vote.

Introduced as a 61st-minute substitute with the match still goalless, Jota struck two crucial goals in Liverpool's battle for a top-four finish, taking over three-quarters of the vote.

The Southampton striker scored in a third consecutive match against his former club Burnley, while also providing an assist in the thrilling comeback victory.

Kane overtook Mohamed Salah in the race for the Golden Boot, scoring his 18th and 19th goals of the season and claiming over 80 per cent of the vote.

Just under three-quarters of the vote went to the Manchester United playmaker, who set up Marcus Rashford for the equaliser as the Red Devils came from behind.

The Everton midfielder marked his return from injury with the opening goal as his side drew with Crystal Palace.

A superb solo goal and a brilliant assist helped West Ham United to victory and a place in the top four.