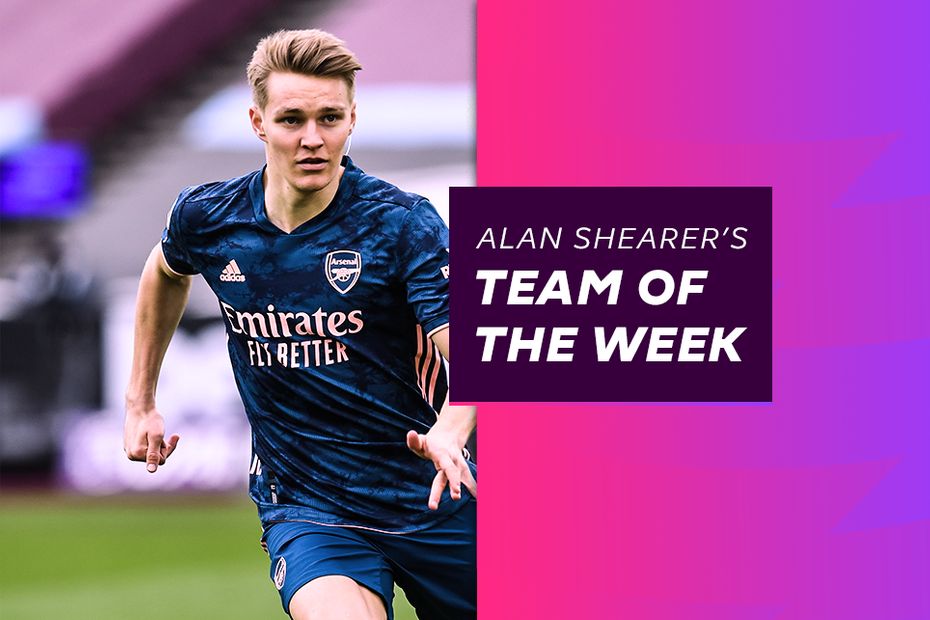 'When everyone was trembling he was composed' External Link

When Arsenal went 3-0 down at West Ham United on Sunday few would have expected anything other than a home win at the London Stadium, but with the help of the brilliance of Martin Odegaard the Gunners came away with a point.

Odegaard has improved with every match since signing on loan from Real Madrid in January and, after another commanding performance in Arsenal's remarkable comeback, Gunners fans will be hoping he makes that deal permanent, according to Alan Shearer.

The Premier League's record goalscorer has placed the Norway captain at the heart of his Team of the Week.

Calum Chambers (ARS) WHU 3-3 ARS
"Claimed an assist and forced an own goal with two superb right-wing crosses. The defender has been rejuvenated by Mikel Arteta."

Lewis Dunk (BHA) BHA 3-0 NEW
"Brighton's captain led by example as the home side kept Newcastle quiet and earned a big victory in their fight for safety."

Joel Veltman (BHA) BHA 3-0 NEW
"An assist and a clean sheet ensured the Seagulls got three crucial points that could well have lifted them out of the relegation fight."

Raphinha (LEE) FUL 1-2 LEE
"Another fine performance from the Brazilian, who showed great footwork and composure for Leeds' winning goal."

Martin Odegaard (ARS) WHU 3-3 ARS
"He ran the game from midfield and was the driving force in Arsenal's fightback. Gunners' fans will be hoping he signs permanently."

Leandro Trossard (BHA) BHA 3-0 NEW
"An outstanding display by the Belgian, marked by some incisive passes and a wonderful opening goal that set the tone for victory."

Lucas Moura (TOT) AVL 0-2 TOT
"The Brazilian was instrumental in a much-needed win for Spurs, getting an assist and causing all sorts of problems for the Villa backline."

Jesse Lingard (WHU) WHU 3-3 ARS
"An outstanding goal, an assist and another great display in this brilliant loan spell for Man Utd's winger at West Ham."

Patrick Bamford (LEE) FUL 1-2 LEE
"You wouldn't have guessed he was carrying an injury. A superbly taken goal and a great assist as he led the line brilliantly."

Manager: Graham Potter (BHA) BHA 3-0 NEW
"Brighton were brave and assured in their approach: a fitting reflection of their manager."