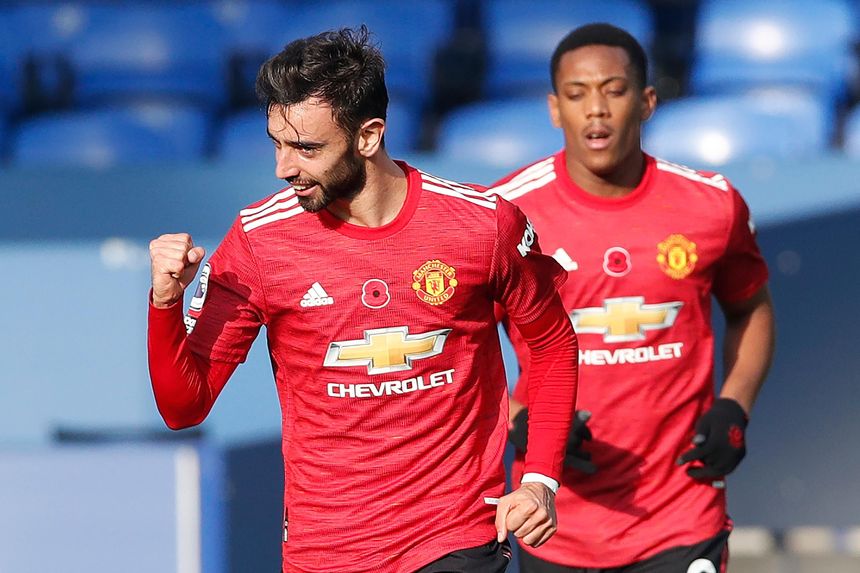 Bruno Fernandes: It's about the team, not me External Link
FPL team news: Late test for Jota
Neville: Fernandes impact like that of Cantona

Two goals and an assist against Everton helped Bruno Fernandes (£10.5m) continue his prolific away form in Fantasy Premier League.

The Manchester United midfielder returned 17 points on Saturday, his third consecutive double-digit haul on the road.

Fernandes has scored or assisted in all 10 of his away appearances since joining Man Utd in January.

And he has strong prospects for further returns in the weeks ahead.

Man Utd have three away fixtures in the next five Gameweeks and also host West Bromwich Albion in Gameweek 9.

Patrick Bamford (£6.0m) has also prospered on his travels this season.

Bamford finished Saturday as the joint-third highest scorer in FPL, with his 58 points level with Mohamed Salah (£12.4m).

The Leeds striker is the best player in the game in terms of value, having returned 9.7 points per million.

The attacking midfielder started his first match since Gameweek 4 and his involvement at set-pieces was a big influence.

Eze’s goal and assist each came from dead-ball situations.

Palace's short-term schedule looks promising for their attackers, with each of their next three matches scoring two in the Fixture Difficulty Ratings (FDR).

West Ham United are another team with a favourable run of opponents. Only two of their next 12 matches score more than three in the FDR.

Lukasz Fabianski (£5.0m) goes into that run as FPL's highest-scoring goalkeeper. He made a penalty save, kept a clean sheet and got maximum bonus points in a 1-0 win over Fulham.

Tomas Soucek (£4.9m) scored the winner in that match and can offer big value as a starting midfielder for FPL managers over the coming matches.

Chelsea conceded for the first time since Gameweek 5 in their 4-1 home win over Sheffield United.

But even though they missed out on clean-sheet points, defenders Ben Chilwell (£5.9m) and Thiago Silva (£5.5m) scored a goal apiece.

Both goals were set up by Hakim Ziyech (£8.1m), who has delivered four attacking returns and six bonus points in his first two Premier League starts.

The Moroccan’s display has made him the most-bought player for Gameweek 9, already brought in by 118,000+ managers ahead of a trip to Newcastle United to follow the international break.