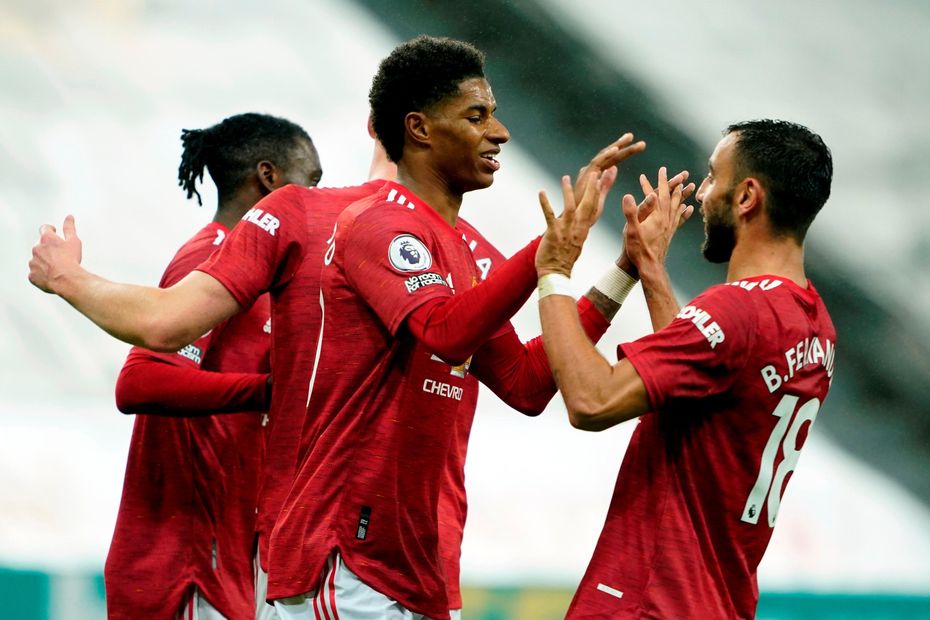 With a goal and two assists at Newcastle United, Marcus Rashford (£9.5m) achieved his season-high haul in Gameweek 5 of Fantasy Premier League.

The Manchester United star produced 15 points in the 4-1 win thanks to a move up front.

Rashford is listed as a midfielder in FPL but played as a striker at St James’ Park, with team-mates Anthony Martial (£8.8m), Edinson Cavani (£8.0m) and Mason Greenwood (£7.3m) all unavailable.

Bruno Fernandes (£10.5m) also had a very successful outing against Steve Bruce’s side.

The @ManUtd football in question ⬇️

The Portuguese atoned for a missed penalty by producing a goal and an assist, claiming 11 points.

He has scored in each of the last three Gameweeks, totalling 29 points in that period.

Pierre-Emerick Aubameyang (£11.8m) was another FPL midfielder who moved up front in Gameweek 5.

But the Arsenal man blanked against Manchester City, who had Raheem Sterling (£11.5m) to thank for their 1-0 win.

Elsewhere, Mohamed Salah (£12.3m) is now the top-scoring player in FPL after his goal in Liverpool’s 2-2 draw against local rivals Everton.

The Egyptian has blanked just once in the first five Gameweeks.

But the Toffees’ Dominic Calvert-Lewin (£7.7m) has been even more reliable.

His late equaliser means he has scored in all five of the opening Gameweeks.

Calvert-Lewin is the most-bought player in FPL this season, earning over 3.13 million new owners since the start of the campaign.

And Everton face Southampton, Newcastle and Fulham in the next four Gameweeks, with all three sides having weak defences.

Meanwhile, Timo Werner (£9.3m), the most-sold player in FPL, finally rewarded his patient owners with his first goals of 2020/21.

The Chelsea forward had been transferred out by over 2.21 million managers after producing just one assist in his first four outings.

After playing on the left wing in previous matches, he benefited from a move up front at home against Southampton.

Setting up Werner’s first goal, the left-back has now supplied an assist in both of his Premier League appearances for the Blues.

Chilwell’s total of two assists is already just one fewer than he managed in the entire 2019/20 campaign for Leicester City.