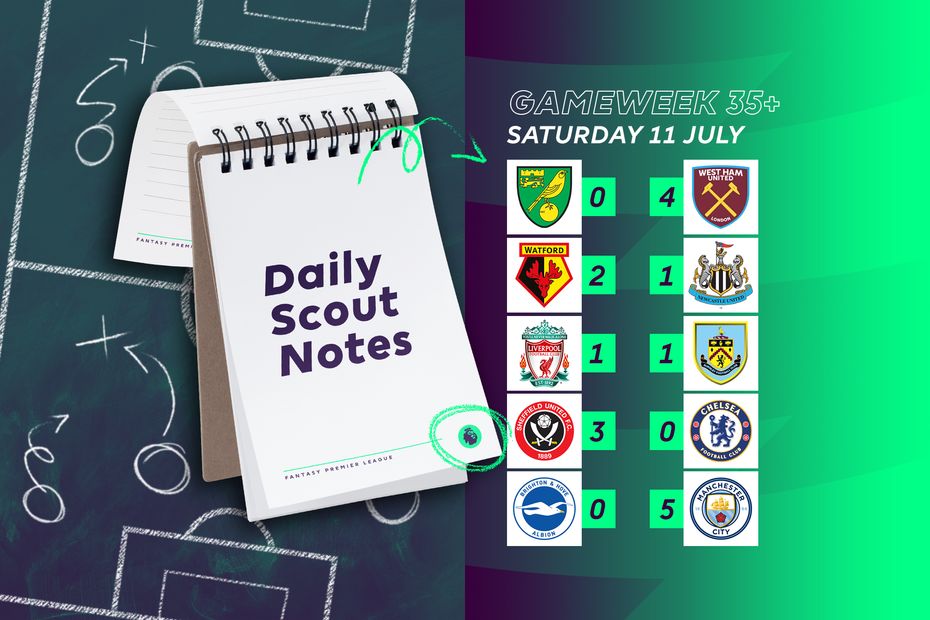 Playing up front for the Hammers, Antonio scored all four of their goals to record a 26-point return at Carrow Road.

The Hammers' attacker has found the net on six occasions since the season resumed, with all those goals coming in the last four Gameweeks.

Still owned by less than 3.0 per cent of squads, Antonio has the schedule to continue thriving as a huge differential in FPL.

West Ham's final two home matches of the campaign, against Watford and Aston Villa, both score only two in the Fixture Difficulty Ratings (FDR).

Norwich have been relegated on the back of seven successive losses.

And their poor defensive form suggests that handing the captaincy to an attacking opponent can be a very profitable tactic.

Along with Antonio, both Pierre-Emerick Aubameyang (£10.9m) and Leandro Trossard (£5.8m) have also claimed double-figure hauls against the Canaries in the last four Gameweeks.

That raises the armband appeal of Chelsea pair Willian (£7.3m) and Christian Pulisic (£7.3m), who face Norwich at Stamford Bridge in Gameweek 36+.

The captain scored both their goals from the spot in a 2-1 win over Steve Bruce's side, also picking up the maximum three bonus points.

Deeney has found the net on eight occasions since Nigel Pearson was appointed head coach in Gameweek 18, a total bettered by only three other forwards in FPL.

The Senegalese had blanked in four successive matches since the season resumed but has claimed back-to-back assists against Norwich and Newcastle.

However, interest in Watford's key players is limited by their remaining matches.

Although a visit to West Ham in midweek looks appealing, they then face Manchester City and Arsenal in the final two Gameweeks.

The Magpies' forward has three goals and an assist in the last five Gameweeks, producing returns on four of those occasions.

By comparison, Gayle had managed only one assist in the first 30 Gameweeks.

Nonetheless, Newcastle also have a testing run of opponents likely to deter investment.

They face Tottenham Hotspur and Liverpool in the final three Gameweeks.

Mohamed Salah (£12.6m) and Sadio Mane (£12.3m) both blanked at home for only the second time this season in Liverpool's 1-1 draw with Burnley.

They were backed by a combined 1.68million FPL managers with the Gameweek 35+ armband, with 1.2million favouring the Egyptian.

Salah had six shots but was unable to find a way past Nick Pope (£5.0m) in goal for the visitors.

The Clarets' No 1 made his season-high eight saves to extend his lead at the top of the goalkeeper standings.

Instead, it was Andrew Robertson (£7.0m) who broke the deadlock for Jurgen Klopp's side.

Restored to the starting XI along with Mane after his midweek rest against Brighton & Hove Albion, Robertson has been the Reds' most productive defender since the season resumed.

He has produced one goal, two assists and two clean sheets in the last five Gameweeks.

Meanwhile, owners of Trent Alexander-Arnold (£7.8m) were left frustrated after he only featured as a second-half substitute.

But with back-to-back matches against Arsenal and Chelsea up next, Liverpool are expected to return to full strength.

For Burnley, Jay Rodriguez's (£5.7m) equaliser took his tally to three goals and an assist in his last four matches.

He could prove a budget-friendly option against Norwich and Brighton in the final two Gameweeks.

A 13th clean sheet of the campaign helped Dean Henderson (£5.2m) move up to second in the FPL goalkeeper standings.

And their upcoming schedule suggests the Blades are set for more success. According to the FDR, two of their final three fixtures score only two.

In attack, Olivier McBurnie (£5.5m) could also appeal as a budget-friendly pick. The Scot delivered his highest haul of the season with a goal and an assist on Saturday.

Hope for Willian and Pulisic?

For Chelsea, Willian and Christian Pulisic disappointed the combined 372,466 managers who bought them for the Bramall Lane match.

The pair had been in sparkling form, with seven goals and five assists between them since the restart.

But their owners will still be optimistic of big returns against Norwich in midweek.

The Canaries have lost seven successive matches and have conceded a league-leading 67 goals.

Up front, Olivier Giroud (£6.7m) is pushing for a recall after dropping to the bench for Tammy Abraham (£7.4m) against the Blades.

The Frenchman has scored in four of his last five starts.

He has delivered double-figure returns in four of his six appearances since the restart.

Jesus scored once and supplied two assists for a 14-point return.

However, Kevin De Bruyne (£10.8m) proved a huge disappointment for the 853,000+ managers who handed him the captaincy.

The third-top armband pick in Gameweek 35+, the Belgian played no part in any of his side’s goals, earning just three points.

City's schedule looks very promising for a triple-up on their attackers. Pep Guardiola's side face three of the bottom four in the final three Gameweeks.

They play at home to AFC Bournemouth and Norwich, with a visit to Watford in between.

Phil Foden (£5.4m) is one to consider in midfield. He was benched for the second time in three Gameweeks and looks set to return against the Cherries in midweek.

Brighton also have a kind schedule, with two of their final three matches scoring only two in the FDR.