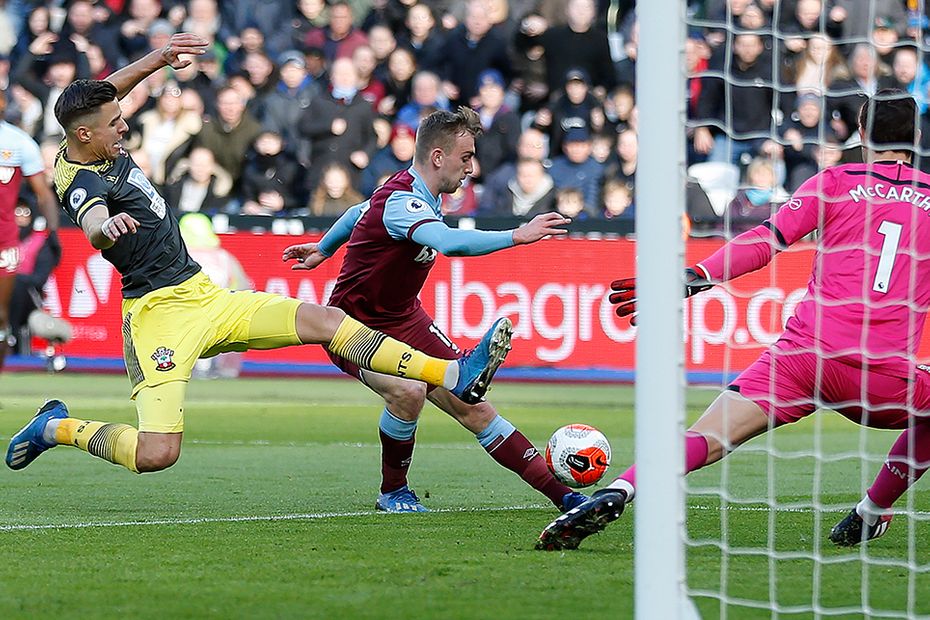 West Ham United’s lack of athleticism means they will need to hold a deep and compact defensive line when they visit Tottenham Hotspur on Tuesday.

Midfield duo Mark Noble and Tomas Soucek are excellent technical footballers but neither man is quick across the ground.

In fact they are two of the slowest players in David Moyes’ squad.

Therefore they will sit in front of centre-backs Declan Rice and Issa Diop and attempt to frustrate a Spurs side that will want to use the explosive pace of Steven Bergwijn and Son Heung-min to get behind the rearguard.

The battle out wide

West Ham’s full-backs will need protection from the wide midfielders in front of them.

Containing Bergwijn will not be easy for left-back Aaron Cresswell, so do not be surprised if Michail Antonio operates on the flank rather than up front in this match-up.

Moyes may need to use Antonio and his physicality to shield the 30-year-old defender.

On the other flank Son is significantly quicker than 19-year-old Jeremy Ngakia.

So, for tactical reasons, Ryan Fredericks could get the nod ahead of the promising youngster at right-back.

The former Spurs defender has clocked a top speed of 35.46km/hr and looks more suitable for this particular assignment.

In the middle of the park it is hard to imagine Noble and Soucek stepping forward to press on too many occasions.

All of the central midfielders available to Jose Mourinho are fast enough to leave them trailing in their wake if space opens up in these areas.

The Hammers should hold a low block, shrink space, and break on the counter-attack once they turn possession over.

They attempted this tactic at home against Wolverhampton Wanderers last weekend but were undone by two outstanding second-half goals.

Frustratingly, the Hammers mustered just seven shots at home against Wolves, with only two hitting the target.

They have struggled to carve out opportunities throughout 2019/20, with just three Premier League rivals attempting fewer shots.

While Moyes is a coach renowned for defensive organisation, he knows the importance of offering an attacking threat and being able to stretch opponents on the break.

This is one area his side needs to improve.

Bowen to answer the call?

Jarrod Bowen earned a wonderful reputation in the Championship for scoring goals from quickly-constructed transitions.

Hull City based their style around winning turnovers that would release the 23-year-old into space before opposition defenders were set.

Quick and blessed with a powerful and accurate left foot, Bowen is an individual who can produce match-changing moments.

In a contest where they are expected to absorb pressure, West Ham will no doubt rely on Bowen’s quality when possession changes hands.

Moyes has quality passers at his disposal who will look to accurately pick him and Antonio out on turnovers.

If they are to repeat last season’s 1-0 win at Tottenham Hotspur Stadium, which was clinched by Antonio's goal, this ploy gives them the best chance.