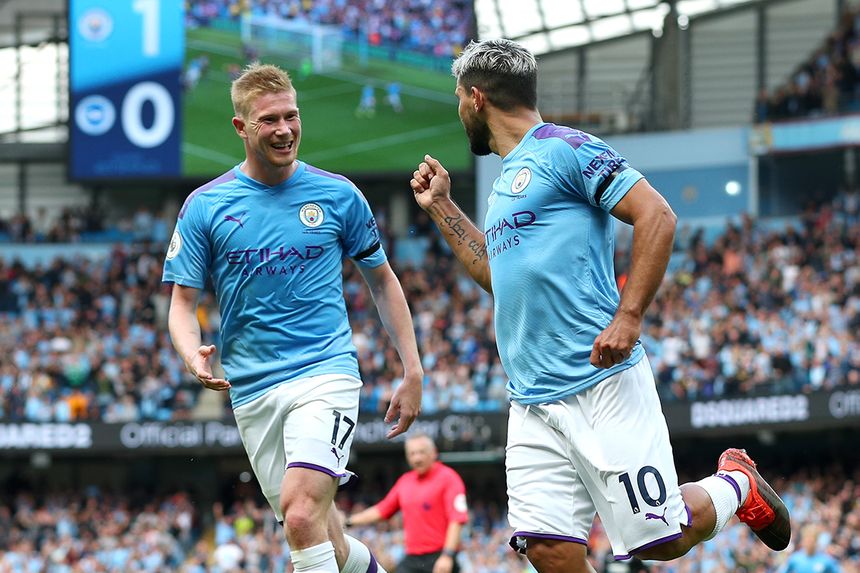 As one of the four teams with two fixtures in Gameweek 30+, Manchester City players are likely to dominate the captaincy battle in Fantasy Premier League.

Pep Guardiola’s side are at home on both occasions, hosting Arsenal and Burnley.

The form of Kevin De Bruyne (£10.6m) and Sergio Aguero (£11.8m) at the Etihad Stadium could be decisive when it comes to picking a captain in FPL.

De Bruyne has produced five of his seven double-figure hauls this season at home.

He also recorded his season-high haul of 19 points against Arsenal in Gameweek 17, scoring two brilliant goals and providing an assist in a 3-0 away win.

He also has a fine record when playing against each of his upcoming opponents at the Etihad Stadium.

The Argentinian hit a hat-trick in a 3-1 win over Arsenal last season.

And he has found the net in every home appearance for Man City against Burnley, scoring six goals in five appearances across all competitions.

They have produced five and four double-figure returns respectively this season.

Both have impressed under new head coach Mikel Arteta, averaging 5.9 and 5.7 points per start respectively.

The playmaker has scored seven goals and provided seven assists in his 26 appearances.

The Scot enjoyed a successful previous meeting with Villa, scoring twice to record his season-high haul of 15 points in Gameweek 17.

Holly Shand (@FFCommunity_): I can't look beyond Man City players for the armband. Sterling and Aguero are both tempting, but it seems a differential in itself owning both. I'll be playing safe with De Bruyne, who was incredible in the reverse fixture.

Ash (@FPLHints): With so many variables in play it is sensible to have a safe armband pick. De Bruyne makes perfect sense with his established role in the team. An honourable mention should also go to Grealish as Villa have it all to play for, but captaining him may be a risk too far.

Paul Gee (@FPLPaulGee): It's got to be a City player! Either Sterling, Aguero or De Bruyne will be great picks. De Bruyne seems to be the safe option and will be my choice. The other two if you feel like going for it.

Sam Bonfield (@FPLFamily): It's all about City for me. The decision between De Bruyne and Aguero is more difficult. I think I'll end up with the armband on Aguero due to his explosive potential, but I think De Bruyne could be an excellent pick, too.

Lee Bonfield (@FPL Family): On a Free Hit, I'm like a kid in a sweet shop this week, especially with the captaincy. I'm choosing between Aguero, Aubameyang and De Bruyne. I'm edging towards the Belgian, mainly thanks to his set-piece duties. However, it's a brave move backing against Aguero.

Ben Crabtree (@FC_CrabDogg): Aguero had the armband when I opened my team and I've not considered taking it off him. Guardiola will want him match fit for the UEFA Champions League.

Ben McNair (@drbenmcnair): It has to be a Man City player. My pick is Aguero. He may see slightly fewer minutes under the new five-substitution rule, but other players whose minutes were previously secure will be impacted more.

Geoff Dance (@GeoffreyDance): Like many others I'm looking to Man City for my captaincy, and I'll likely pick Aguero. While Gabriel Jesus (£9.6m), De Bruyne, Sterling and even Aymeric Laporte (£6.3m) have their merits I think Aguero will be the highest scorer in Gameweek 30+.