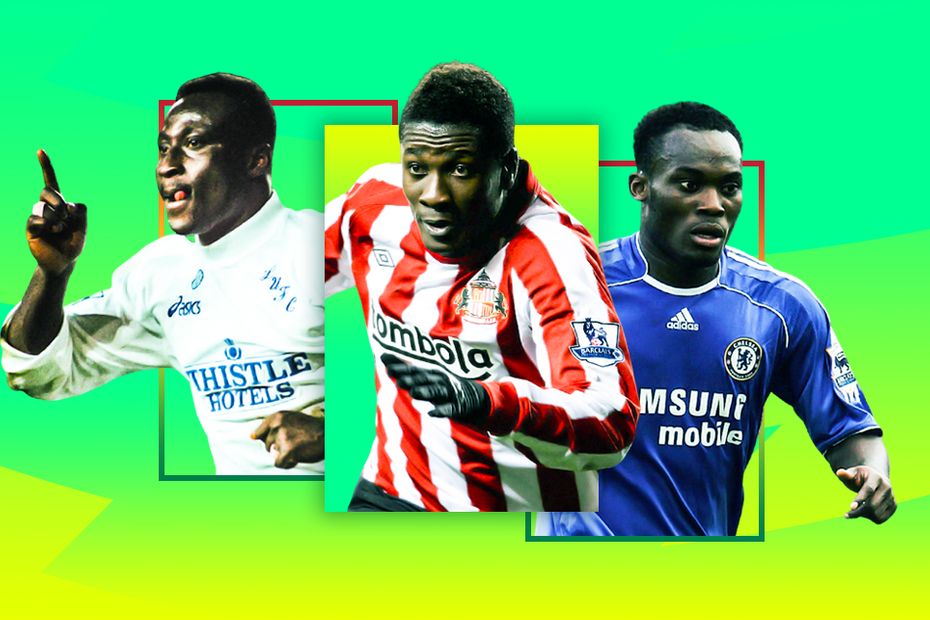 Yeboah? Gyan? Essien? Choose your favourite star from the West African country to feature in the competition

We are looking at the achievements of the Premier League's top Ghanaians and we want to know who you think has been the best.

A total of 25 players from the West African country have featured in the Premier League, with Nii Lamptey being the first when he represented Aston Villa in September 1994.

Tony Yeboah became the first Ghanaian goalscorer in the competition when he struck for Leeds United in February 1995.

It was one of 24 Premier League goals he scored, some of which were truly breathtaking.

Indeed, Yeboah's goal tally is the joint-highest among his countrymen but is close to being surpassed by Jordan Ayew.

The Crystal Palace forward has scored a career-high eight goals in the current campaign, boosting his total to 24 since his first came for Aston Villa against a Swansea City side which featured his brother, Andre Ayew.

In terms of appearances, Michael Essien leads the way with 168 for Chelsea. The two-time champion is one of only three Ghanaians to lift the Premier League Trophy.

The others, Jeffrey Schlupp and Daniel Amartey, were both part of Leicester City's fairytale 2015/16 campaign.

Ghana's most-capped player and highest-ever goalscorer also made his mark on the Premier League.

While Asamoah Gyan's time in the competition was brief, he reached 10 goals in one season for Sunderland, where he was joined on loan by his compatriot Sulley Muntari.

Three seasons prior Muntari had helped Portsmouth to their highest-ever Premier League finish as ended the 2007/08 campaign in eighth place and won the FA Cup.

You can watch a video of great Ghanaian goals above, and have a look at some eye-catching numbers in the table, before voting on who you think is the Premier League's best ever player from Ghana.