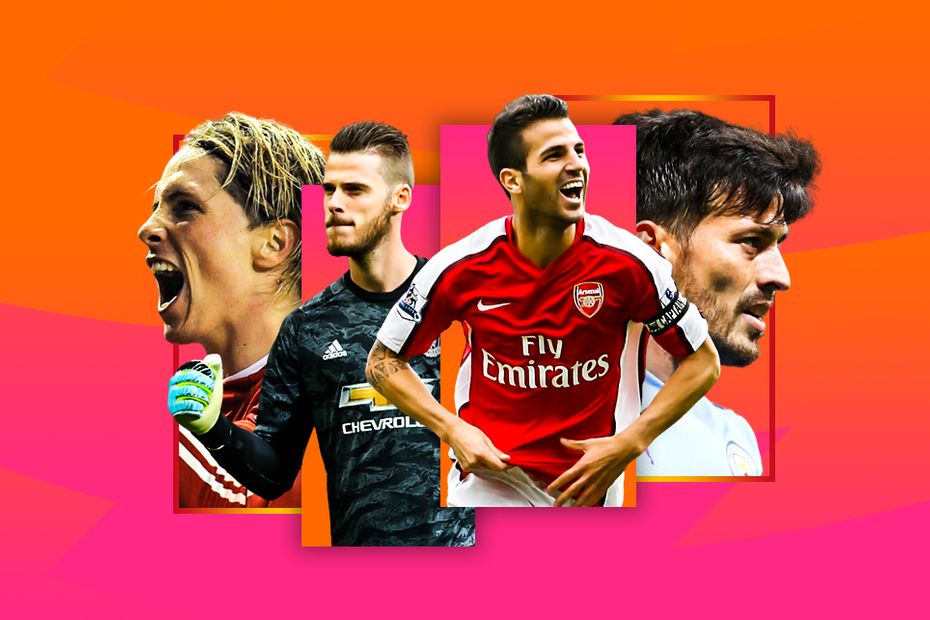 Torres? De Gea? Fabregas? Silva? Choose your favourite player from Spain to have graced the competition

Best goals by Spanish players
Goal of the day: Torres volley shocks Blackburn
Who is the Premier League's best ever Brazilian player?

We are looking at the achievements of the Premier League’s top Spaniards, and we want to know who you think has been the best.

In all, 144 Spaniards have played in the competition, making Spain the fifth most-represented country.

Nayim became the first when he featured as a substitute for Tottenham Hotspur against Middlesbrough in October 1992.

And since then, a host of his compatriots have made notable contributions in the competition.

Fernando Torres is the highest-scoring Spaniard after netting 85 goals for Liverpool and Chelsea, partly thanks to the creativity of his former Reds team-mate Xabi Alonso, who is among the select group of players to score from inside his own half.

Diego Costa's time in the competition was shorter than Torres's but, in 89 matches over three seasons at Stamford Bridge, he struck 52 goals, added 16 assists and won two titles.

David Silva has lifted the Premier League Trophy on four occasions with Manchester City, twice as many as any other Spanish player, after contributing 57 goals and 90 assists.

Cesc Fabregas leads the way for both appearances and assists, having set up 111 goals in 350 matches for Arsenal and Chelsea and been a champion twice with the Blues.

He is one of five players to have set up four goals in a match, a Premier League record, alongside fellow Spaniards Santi Cazorla and Jose Antonio Reyes.

Juan Mata has amassed a combined total of 103 goals and assists for Chelsea and Manchester United, while Cesar Azpilicueta has been a reliable defender for the Blues since 2012/13 and has won two league titles.

Meanwhile, David De Gea has racked up 108 clean sheets and won Man Utd's Player of the Year award more than anyone else, taking the prize four times.

You can watch a video of great Spanish goals above, and have a look at some eye-catching numbers in the table, before voting on who you think is the Premier League's best ever player from Spain.