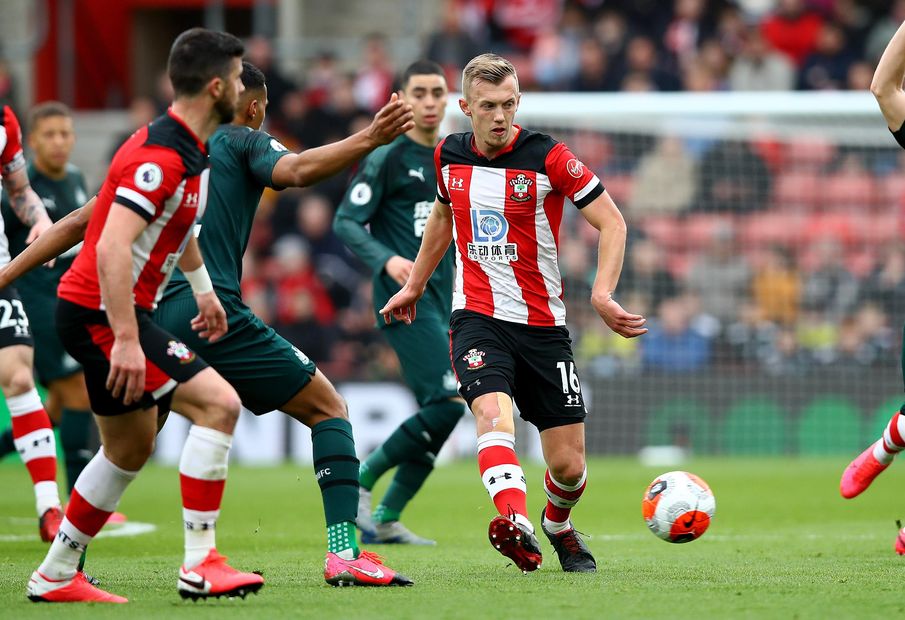 For their high-octane 4-2-2-2 system to work properly, Southampton’s players have to be both energetic and aggressive, particularly in central midfield.

Because the full-backs get forward to supply width, while four attackers also push on, the pair of holding midfielders are given a lot of work to do.

They have to close down opponents, cover spaces left by the full-backs and protect the back four.

Indeed, while Danny Ings has scored 15 Premier League goals, Ward-Prowse has arguably been Ralph Hasenhuttl’s most important player this season.

Ward-Prowse is always on the move in the middle third, both in and out of possession.

Hojbjerg is the more natural ball-winner, regaining possession 10.52 times per 90 minutes, the highest average of any Premier League midfielder.

Ward-Prowse still contributes greatly in that department too, but it is his athleticism that sets him apart.

Covering more ground than any other Southampton player, and doing so at the highest average speed, Ward-Prowse’s drive and mobility is key to his team’s tactics.

Without the tempo he helps to create and maintain, Saints would not be as effective.

The Academy graduate is known for his versatility and is ideal for the multi-faceted demands of his role in Hasenhuttl’s formation.

He is comfortable anywhere on the pitch. And his ability to play at right-back, as a winger or as a more advanced attacking midfielder gives his manager selection options.

Another reason why Ward-Prowse is so tactically invaluable is his prowess at dead-ball situations.

The 25-year-old has hit the target from eight direct free-kicks this season, three more than any other Premier League player.

He has also assisted two set-piece goals this season, while creating 30 opportunities from dead-ball situations in total.

Ryan Bertrand is the only other Saints player with more than one key pass from a set-play in 2019/20, with nine.

The combination of qualities that Ward-Prowse brings to the Southampton side is incredibly valuable to Hasenhuttl.

It is little wonder he has established himself as a certain starter this season.