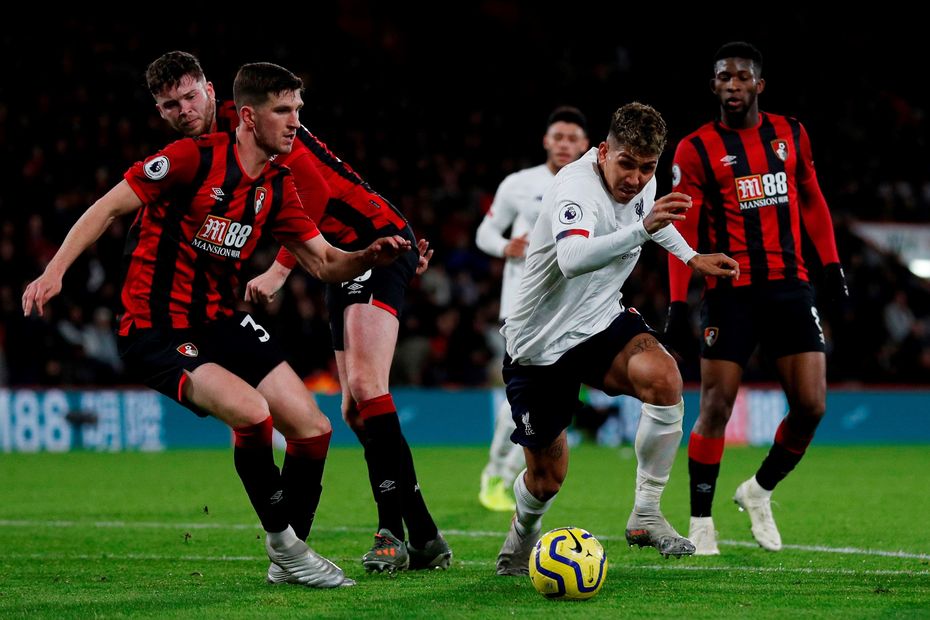 And AFC Bournemouth could now follow the same blueprint as they bid to become the next side to frustrate the leaders.

Jurgen Klopp’s Reds are used to having to break down defensive teams, and overall they have done it well this term.

But there has undoubtedly been a dip in their fluidity, drive and quality, contributing to a run of three defeats in their last four matches in all competitions.

That can give the Cherries optimism that they too can spring a surprise in Saturday's early kick-off.

Building on draw with Chelsea

AFC Bournemouth’s three Premier League away wins this season have all come in matches where they focused on keeping a compact shape.

Defending the width of their penalty box and ensuring there were no holes, Eddie Howe’s men set out to frustrate their opponents and play on the break at Chelsea, Southampton and Aston Villa.

Forcing those teams to play slow possession football and steering them out wide was a fruitful ploy.

Those tactics were even more pronounced in last weekend’s home match against Chelsea.

Frank Lampard’s visitors made 451 passes inside AFC Bournemouth’s half and delivered 31 open-play crosses, yet they needed a late goal to salvage a 2-2 draw.

Liverpool encountered similar tactics when they visited Watford last weekend, and they did not enjoy it.

They laboured badly, completing 386 of their 472 passes in the Hornets’ half but registering just one successful cross.

To play this way against a side of Liverpool’s class, you need certain ingredients in your team.

Pace up front is essential, to retain an air of menace on the break.

Ismaila Sarr provided that crucial outlet for Watford, and Joshua King and Callum Wilson can do the same for AFC Bournemouth against a Liverpool side without injured goalkeeper Alisson.

It is also essential to have athletic central midfielders who can shift towards the flanks to slow down attacks from the full-backs.

The Hornets did that to great effect against the Reds, and Lewis Cook, Dan Gosling and Philip Billing all have the energy and industry to emulate the Hornets.

It is vital too to limit the number of fouls conceded, as Liverpool are one of the most dangerous teams from set-pieces.

Watford ticked that box, shrewdly giving away just three free-kicks in their 3-0 win.

Then, when crosses are fired into the box, the centre-backs must be brave and clear the danger.

Howe has reasons to feel optimistic on those last two fronts.

His side are the second-cleanest team in the league, and no team make more clearances per match.

Fouls and clearances by club

Steve Cook and Nathan Ake are among the best at repelling balls that enter their box.

Among all Premier League players, they are ranked fourth and 17th respectively for clearances this season.

If anyone can handle a bombardment from the wings, it is AFC Bournemouth.

The Cherries have historically struggled against Liverpool, conceding 17 goals in the last five meetings and failing to score any in reply.

But they know their hosts are at their best when enjoying fast build-ups, so their game plan must revolve around slowing them down.

The leaders have an astounding 34.3 per cent chance conversion rate from moves classified by Opta as "fast". But that drops to 5.4 per cent on slow build-ups.

Studying Watford’s tactics and attempting to replicate their success looks likely to give AFC Bournemouth their best chance of success.