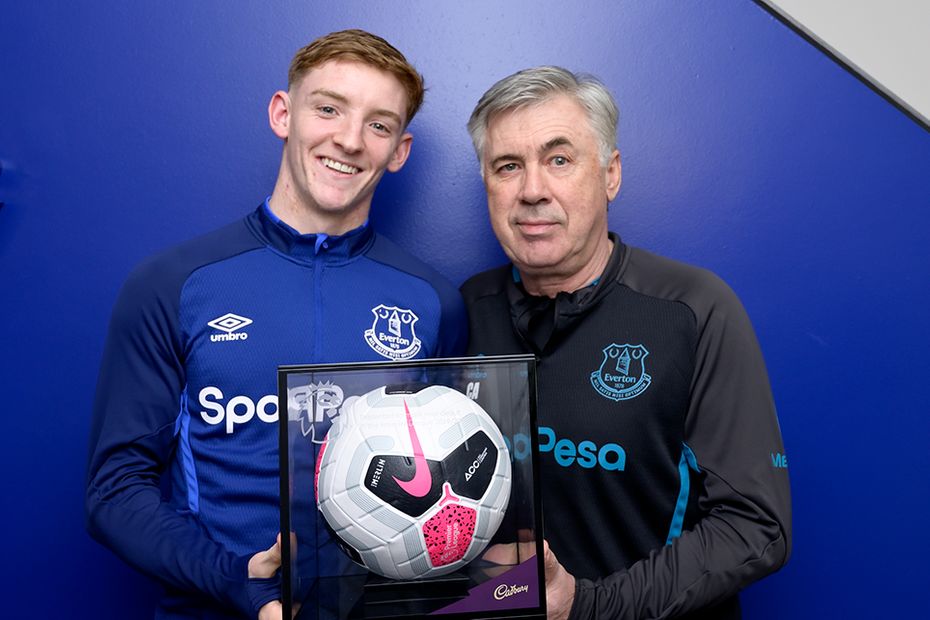 Anthony Gordon says he is looking at two of Everton's in-from attackers as role models after receiving his Premier League Debut Ball following his first appearance in the competition.

The teenage forward was handed his top-flight debut by Carlo Ancelotti last month, coming on as a half-time substitute in a 1-1 draw at West Ham United on 18 January.

Academy graduate Gordon has worked his way up to the first team after scoring seven goals in 12 matches at Under-23 level and now wants to emulate the club's strike duo of Dominic Calvert-Lewin and Richarlison, who have claimed 22 PL goals between them this season.

"I have to [do extra]… to match the likes of Dom and Richarlison," Gordon told Everton's official website. "They are top finishers, two top players in the Premier League and on great runs of form.

"They have both scored a lot of goals this season and I am just trying to match what they do."

To mark his achievement, Gordon received his PL Debut Ball, which is presented by Cadbury to homegrown players to celebrate their rise to the top level.

Gordon, who celebrated his 19th birthday on Monday, says the experience at London Stadium has only whetted his appetite to feature more regularly.

"Forty-five minutes is a long time to come on [for] on your debut, you have more chance to make an impression on the manager and fans and it is what you dream of," he said.

"It gives you a taste for more. I went on and saw how good it was: the atmosphere and playing in front of so many people and playing alongside and against top Premier League players I used to watch on TV.

"Now I want to be consistent and get in the team and get more minutes."