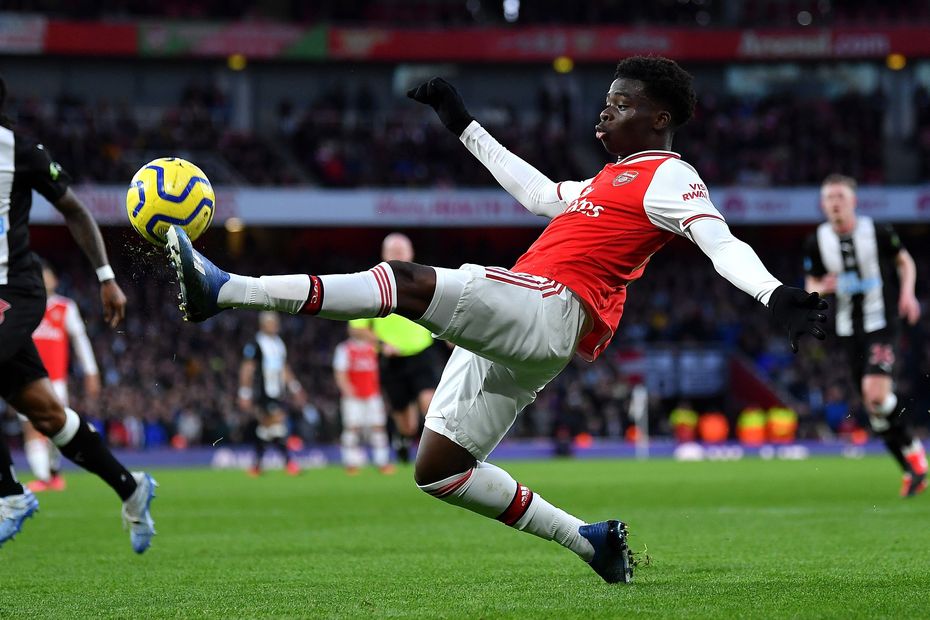 No Gunners player has set up more goals in 2019/20 than the 18-year-old, who Adrian Clarke says can hurt Everton

Bukayo Saka is one of the brightest young talents to emerge in the Premier League this season.

The winger has made 16 top-flight appearances in a breakthrough campaign, with many of his 11 starts coming as an emergency left-back.

At just 18 years of age Saka has adjusted to a new position spectacularly.

Performing with confidence in and out of possession, Saka was superb during Arsenal’s 4-0 home win over Newcastle United on Sunday.

The goal he made for Nicolas Pepe, with a nutmeg followed by a precise pass, was his eighth assist in all competitions this season.

Having also set up Alexandre Lacazette's winning goal in the UEFA Europa League at Olympiacos on Thursday, no Arsenal player has created more goals than Saka in 2019/20.

On paper Arsenal play in a straightforward 4-2-3-1 formation under Mikel Arteta. But the shape of the side changes quite dramatically when they have the ball.

Central midfielder Granit Xhaka regularly moves to left-back, which allows Saka to push forward into an orthodox winger’s position and Pierre-Emerick Aubameyang to shift inside as a second striker.

It is a fluid set-up that enables Saka and Aubameyang to play in the areas that suit them best.

Saka, who only turned 18 in September, is at his best inside the opposition half.

He possesses a good turn of speed, has the tricks to go past opponents and loves to deliver left-footed crosses into the box.

The stats show he is developing into one of the most attack-minded Premier League full-backs, averaging 4.5 crosses per 90 minutes.

Despite playing out of position, Saka’s influence is rising.

And that growth has been especially evident in his appearances at Emirates Stadium under Arteta.

During the 2-1 loss against Chelsea in late December the teenager was understandably quiet. He did not have a single touch inside the Blues’ penalty area.

But in January’s 1-1 home draw with Sheffield United he made three touches inside the box, and against Newcastle that figure jumped again to five.

He also made six successful dribbles in Sunday's triumph.

Touches in opp. box per match

Saka is growing in confidence and this weekend’s opponents Everton will need to be aware of his qualities when the Gunners launch attacks from wide areas.

Scoring three goals in all competitions, alongside his eight assists, Arsenal have unearthed a young talent who is already equipped to shine at the highest level.

His decision-making both on and off the ball belies his age and inexperience.

The Toffees will no doubt try to test Saka’s defensive resolve down that side of the pitch, and it will be interesting to see how he handles that.

But Carlo Ancelotti might be more concerned about how he can hurt his team.

He is a player to look out for this weekend, and for the remainder of the season.