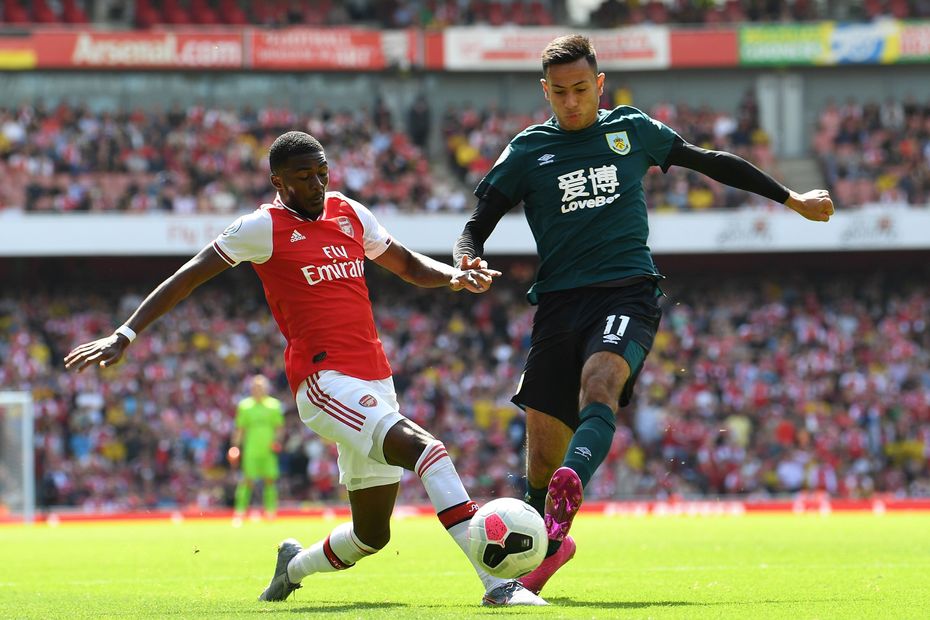 In their quest to deliver an 11th successive Premier League victory against Burnley, Mikel Arteta's Arsenal must work hard to contain the home side's threat from the left flank.

Charlie Taylor and Dwight McNeil have been excellent in hard-fought wins against Leicester City and Manchester United.

Full of industry without the ball and brimming with confidence in possession, the left-sided pairing will be looking to shine again when the Gunners visit Turf Moor.

Last time out at Old Trafford, no Burnley players touched the ball more often than left-back Taylor, who had 63 touches, and winger McNeil, who had 57.

Always offering an outlet, they were flooded with service every time Sean Dyche's side looked to break.

An incredible 62.1 per cent of their attacks stemmed from the left, compared with only 14 per cent from the right.

Performing with real composure and regularly carrying the ball up the pitch to relieve pressure, they did an outstanding job for the team.

Hector Bellerin has played well in his last two appearances, against Chelsea in the Premier League and at AFC Bournemouth in the FA Cup, but the right-back is still feeling his way back from a long-term knee injury.

Trying to keep a tight grip on the exciting McNeil will be a challenge for the Spaniard this weekend.

Burnley rarely dominate possession but, when they counter, McNeil is a very important player for them.

Quick, direct and always keen to take on defenders, he brings dynamism to their attacking play.

With his excellent left foot, he is also capable of delivering the type of crosses that leading scorer Chris Wood loves to attack.

Three of the New Zealander's 10 goals this term have come from McNeil crosses.

So if Bellerin does not get tight enough to block deliveries from that side of the pitch, the Gunners may find it difficult to keep a clean sheet.

Leicester and Man Utd made a combined 1,184 passes between them across 180 minutes of action against Burnley, but collectively they scored only one goal.

Quick passing and clever movement are required to open up holes in the Clarets' well-organised rearguard, and the likes of Taylor and McNeil play a big part in that resilience.

Disciplined and hardworking within a compact 4-4-2 system, they retrieved possession 16 times between them against Ole Gunnar Solskjaer's men.

If selected against Burnley, Bellerin and Nicolas Pepe are sure to be kept busy.

In the Clarets' 2-1 home win over Leicester, Taylor registered a team-high 92 touches.

On average, he and McNeil produced eight open-play crosses per 90 minutes between them.

They will need to be shackled if Arsenal are to extend their remarkable winning streak against Burnley.