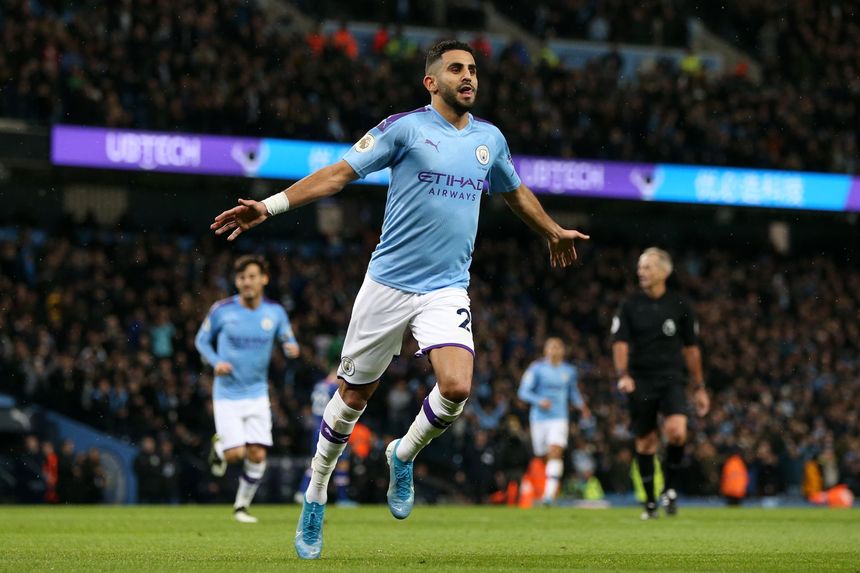 GW23 Ones to watch: Sergio Aguero

A home meeting with Crystal Palace boosts the prospects of Riyad Mahrez (£8.5m) as a major captaincy alternative to Jamie Vardy (£10.0m) in Fantasy Premier League.

The Manchester City winger has been in outstanding form, producing two goals, an assist and 17 points at Aston Villa last weekend.

He has recorded 20 shots in that period, joint-top among all players in FPL.

Vardy has been the most-selected captain in each of the last 10 Gameweeks.

The Leicester City striker scored and produced eight points against his weekend hosts, Burnley, in Gameweek 9.

But he has suffered a drop in form, with just one goal and two assists in his last four outings.

De Bruyne has three goals and six assists in the last six Gameweeks.

At home, his 46 chances created is a league-leading figure.

Aguero, meanwhile, has 28 points in his last two Gameweek appearances.

Managers in search of a differential could consider Alexandre Lacazette (£9.3m).

The Frenchman looks set to be Arsenal's main threat at home against Sheffield United, with Pierre-Emerick Aubameyang (£10.8m) suspended.

Lacazette has proved a consistent source of returns when playing at Emirates Stadium, blanking in just two of his eight appearances there.

Indeed, 44 of his 56 points this season have come in home matches.

Holly Shand (@FFCommunity_): I've provisionally put the armband on my new acquisition Danny Ings (£6.8m). I've ignored him for too long and hope the double points will help me make up the lost ground.

Lee Bonfield (@FPL Family): It's the same question as last week De Bruyne or Vardy? But this week I'm likely to go for Vardy, mainly because of his opposition. Burnley have lost their last four and have only scored one goal in that time, conceding eight. I can see an away win with Vardy bagging the FPL points.

Ben Crabtree (@FC_CrabDogg): Despite last week's disappointment, I'm looking at sticking with Raheem Sterling (£11.8m) and hoping he gets back in the team.

Chuck Booth (@ChuckBoothSport): I dream of Mohamed Salah (£12.3m) dribbling through the Manchester United defence. While this is a good week for Man City options, the rotation has scared me off so I'm returning to the tried and trusted option of Salah. Vardy also stands out but the absence of Wilfred Ndidi (£5.0m) has dented Leicester's appeal a little. If you're looking for an alternative, I'd suggest Richarlison (£8.1m) against West Ham United.

Neal Thurman (@nealjthurman): Vardy and De Bruyne are going to be the popular picks given their form and opposition. If you're looking for something different, I'd consider Tammy Abraham (£7.8m). Newcastle United are shipping goals and Abraham seems to score most of his against bottom-half sides.

Ben McNair (@drbenmcnair): De Bruyne looks the best choice. Man City are creating so many opportunities and the Belgian is just about the only player we can be reasonably sure will be in Pep Guardiola's starting XI.