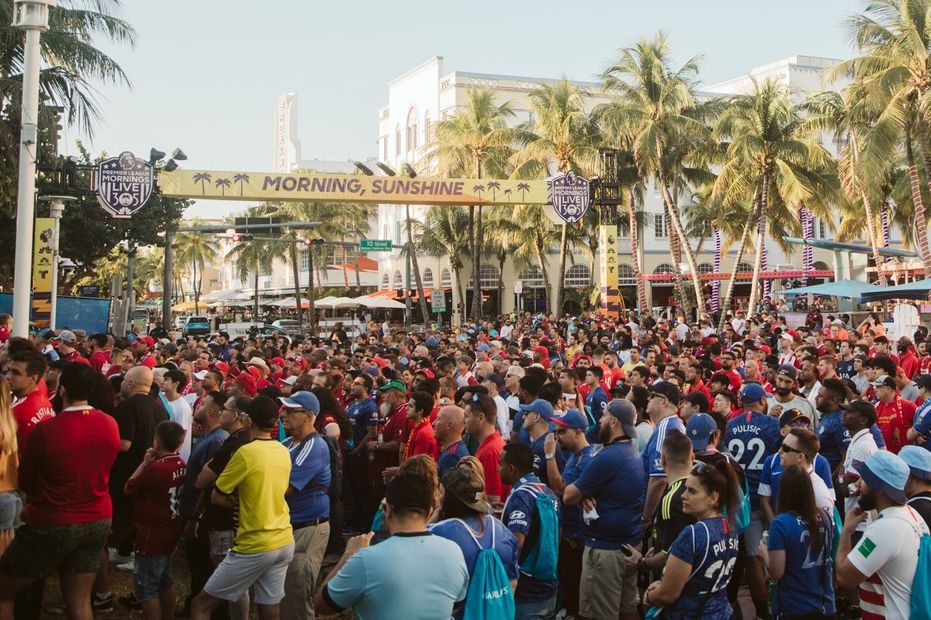 The latest edition of the Premier League and NBC Sports fan-fest, Premier League Mornings Live, came to Miami this weekend and thousands of fans descended on the city’s historic Clevelander South Beach Hotel to watch their teams in action and share their love of the beautiful game.

It was before dawn in Miami Beach on Saturday but the queue of fans to enter the festival stretched around the block.

We're ready for Miami Beach, and it looks like Miami Beach is ready for us!#MyPLMorning @PLinUSA pic.twitter.com/qrAZKpvHSL

The Liverpool fans were in good voice despite the early hour as they prepared to watch their heroes take on Watford at 7.30 A.M. local time.

Christmas came early for those in attendance who were given treats ahead of the action.

Fans didn't have to wait long for the first celebration of the day. Mohamed Salah's goals at Anfield sent the crowd wild.

Fans had the opportunity to make pancakes as faces of famous people. Former Watford star Jay DeMerit tried to do one for his former club's famous owner and rock star Elton John.

Also among the stars in attendance at the event was football royalty in the form of Jill Ellis, the World Cup-winning USWNT coach.

For some fans, such as those of AFC Bournemouth, the day was extra-special as they saw their heroes claim a first win in six, beating Chelsea 1-0 at Stamford Bridge.

DeMerit also got his name printed on the back of a shirt, a service provided to the fans by Premier League partner Avery Dennison.

Tottenham Hotspur were not in action until Sunday, but TV host Adam Richman came down and displayed his colors to NBC.

And it was not just the love for their clubs that was on display at the festival, one Liverpool fan proposed to her partner on air and, fortunately for her, he said, "Yes" to make it a double celebration as the Reds extended their lead at the top of the table.

After the final match of the day the West Ham fans also went home happy having watched their team produce a crucial win at Southampton.