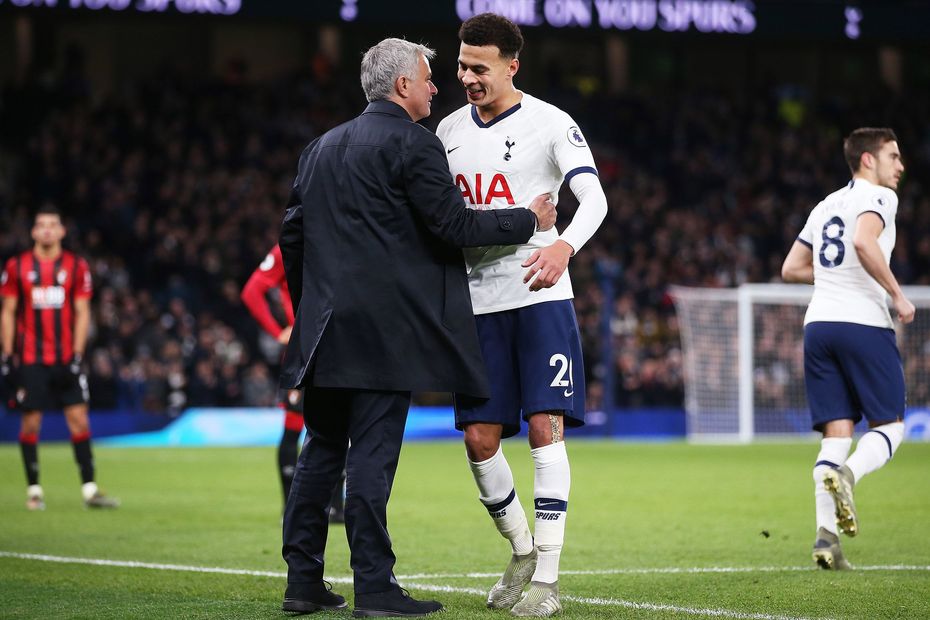 After another two goals in his No 10 role for Spurs, Dele Alli is flying under his new head coach and is in Alan Shearer's MW14 Team of the Week

Jose Mourinho's arrival at Tottenham Hotspur has quickly brought the best out of Dele Alli.

Having provided an assist and played a key part in another goal at West Ham United in Matchweek 13, the 23-year-old scored twice against AFC Bournemouth on Saturday.

With Spurs ultimately beating the Cherries 3-2 in Mourinho's first Premier League home match, they have leapt up to fifth place in the table and lie six points outside the top four, having been 11 points adrift when Mourinho took charge.

Alli's central role in the team's transformation has not gone unnoticed by Premier League Champion Alan Shearer, who has named the midfielder in his Team of the Week.

🆕 @alanshearer's Team of the Week 🆕

Thoughts on his selection? pic.twitter.com/1ANhnAX3OH

Produced some very good saves, and one world-class stop from Raheem Sterling in particular, to help secure a point against the champions.

Provided another two assists. His set-piece delivery was incredible and he stood firm at the other end in the dying minutes when his team were down to 10 men and Brighton were pushing for an equaliser.

Battled brilliantly throughout to ensure Man City never got more than one goal ahead.

Scored two very good goals, showing his aerial prowess, and was a rock at the back.

The left-back's decisive strike was well-taken, with his right foot, and he gave nothing away in front of his own goal to help secure a victory that was huge for his team and his manager.

The 25-year-old's pinpoint free-kick was the difference between the sides. It was a goal of great quality and importance in a real six-pointer at the foot of the table.

Caused plenty of problems for Man City and produced a stunning equaliser. He needs to have more of these performances.

The Belgian continues to be City's main threat from passes, crosses and his own shots on goal. His strike, which put the visitors 2-1 up, was absolutely world class.

He is certainly enjoying life under Mourinho and is back scoring goals again. His movement was excellent and he looks full of confidence in the box now.

His creativity and goal threat is so important to Crystal Palace and he seems to be returning to top form now. One moment of quality broke the deadlock and sent Palace on their way to victory.

Showed good mental resilience to score his retaken penalty after the first one had been saved and his finish for the second goal was clinical.

He really needed that win. His decision to trust David Martin in goal was fully rewarded as his debutant goalkeeper kept a clean sheet. It was a resilient performance all-round and Pellegrini will want more of the same now.