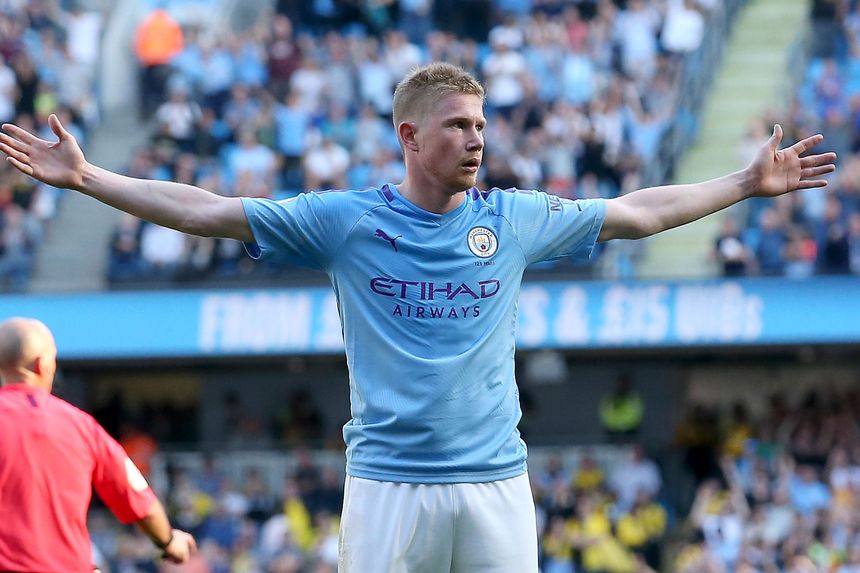 A home encounter with Aston Villa raises the captaincy potential of Manchester City's big-hitters in Gameweek 10 of Fantasy Premier League.

And the starring role of Raheem Sterling (£12.1m) in their UEFA Champions League win over Atalanta served a timely reminder of his potential.

The winger scored a hat-trick and also produced two assists in the 5-1 victory.

Aguero to bounce back?

Sergio Aguero (£12.2m) netted twice against the Italian side on Tuesday evening.

The Argentinian has been sold by more than 61,000 managers after being an unused substitute in last weekend's win at Crystal Palace.

But his remaining 28.8 per cent ownership will be confident he will face Villa on Saturday.

Aguero has been named in the starting XI in all four of Man City's home matches this term, and has provided four goals and two assists in those outings.

However, it is Kevin De Bruyne (£10.1m) who has been the most explosive performer at the Etihad Stadium.

The playmaker has delivered double-figure hauls in all three of his home appearances.

He has 41 points over those fixtures, thanks to two goals and five assists.

Reds duo to produce at home?

Liverpool pair Sadio Mane (£11.8m) and Mohamed Salah (£12.4m) should not be overlooked for their home meeting with Tottenham Hotspur.

Both were on the scoresheet in the 4-1 UEFA Champions League win over Genk on Wednesday.

Mane has delivered 15 and 12-point hauls in his last two Anfield appearances.

And Salah, who has returned to fitness, could punish the 93,000+ managers who have sold him ahead of Friday's 19:00 BST deadline.

At home, his total of 12 shots in the box is bettered by only three players in FPL.

Salah can take advantage of a Spurs defence who have conceded two or more goals in all four of their away matches in 2019/20.

Holly Shand (@FFCommunity_): It has to be Man City's fixture for my armband this week. I'm currently on Sterling over De Bruyne and his midweek heroics have certainly got my hopes up!

Ash (@FPLHints): It's always annoying when you see FPL assets perform so well in the UEFA Champions League and then ultimately blank in the subsequent Gameweek. That aside, my captain has to be Sterling. He's rediscovered his scoring touch and will cause havoc against Villa.

Paul Gee (@FPLPaulGee): It's between Sterling and De Bruyne. If we go off what happened earlier in the season then Sterling might get rested. However, it is worth noting that Pep Guardiola wants to give his players game time to get them "up to speed".

Sam Bonfield (@FPLFamily): Having scored 11, 13 and 17 points in the three home matches he has played this season, De Bruyne looks the obvious captain pick. I'm expecting another double-digit haul from him.

Ben Crabtree (@FC_CrabDogg): I think I'll be taking another shot with Sterling. It feels like it has to be a Man City player with their fixture, and the Englishman must come good at some point.

Mark McGettigan (@FPLGeneral): It's a coin toss between De Bruyne and Sterling for me. I wouldn't look past Man City for the armband this week.

Chuck Booth (@ChuckBoothSport): I want to captain Aguero so badly but with him playing 90 minutes on Tuesday night, the armband has been shifted to De Bruyne. Playing "Pep roulette" will get you burned but captaining the City options who didn't play the week before seems like the way to go. Alternatives are Mane against Spurs and Jamie Vardy (£9.1m) versus Southampton.

Neal Thurman (@nealjthurman): I wish I had a great pick from left field but De Bruyne seems like the strongest choice given quality, match-up and venue. Marcus Rashford (£8.4m) could be worth considering on the off chance Manchester United benefit against Norwich City's poor defence.

Ben McNair (@drbenmcnair): I'll be handing the armband to Sterling once again. Man City are on another level when it comes to creating chances and Sterling seems to be operating more centrally following the return of Benjamin Mendy (£5.9m) at left-back.