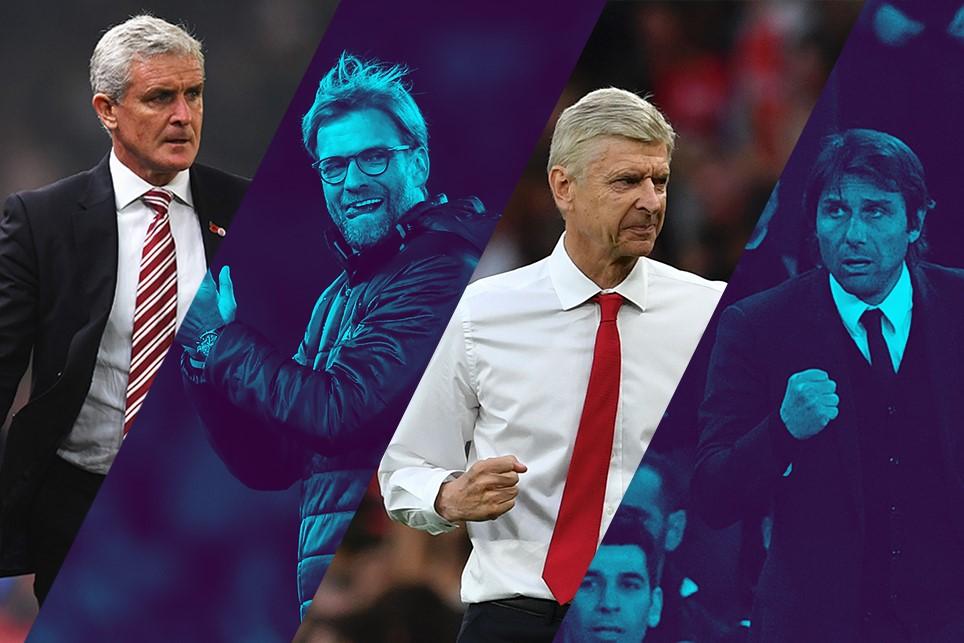 Mark Hughes, the Stoke City manager, is among the nominees for the Barclays Manager of the Month award for October.

After securing a draw with Manchester United, the 53-year-old, who won the award in October 2007 with Manchester City, followed up with three successive Premier League victories to earn a place on the four-man shortlist.

Nominated for the first time is Antonio Conte, the Chelsea head coach, whose side managed four successive wins in the month. He joins Jurgen Klopp, of Liverpool, and Arsene Wenger, the Arsenal manager.

The vote will close at 23.59 GMT on Monday 7 November with the winner announced on Friday 18 November, after the international break.

Mark Hughes (Stoke City)
P4 W3 GF8 GA2 GD+6
With just two points from their opening six matches Stoke started the month second from bottom but a 1-1 draw at Old Trafford served as a platform for three successive victories that lifted them to 12th. Hughes has changed his formation to bring the best out of Joe Allen by deploying the midfielder in a No 10 role, and has coaxed goals from Wilfried Bony and shored up a defence which conceded just twice in the four fixtures.
Man Utd 1-1 Stoke; Stoke 2-0 Sunderland; Hull 0-2 Stoke; Stoke 3-1 Swansea

Antonio Conte (Chelsea)
P4 W4 GF11 GA0 GD+11
After just one point in September Chelsea recovered in style from back-to-back defeats by Liverpool and Arsenal with four wins in a row in October. Switching to three at the back reaped rewards for Conte, whose side conceded no goals and scored 11, as Eden Hazard and N'Golo Kante returned to form while Diego Costa maintained his Premier League scoring run. The 4-0 victory over Man Utd helped to lift Chelsea to within a point of the top by the end of October.
Hull 0-2 Chelsea; Chelsea 3-0 Leicester; Chelsea 4-0 Man Utd; Southampton 0-2 Chelsea

Jurgen Klopp (Liverpool)
P4 W3 GF8 GA4 GD+4
The winner of September’s award is in line for back-to-back triumphs after Liverpool again secured three victories in the month, while maintaining an exciting brand of attacking football that only Man Utd were able to shut out. Liverpool’s displays have thrilled fans and neutrals alike and only goal difference divides them from the Premier League leaders.
Swansea 1-2 Liverpool; Liverpool 0-0  Man Utd; Liverpool 2-1 West Brom; Crystal Palace 2-4 Liverpool