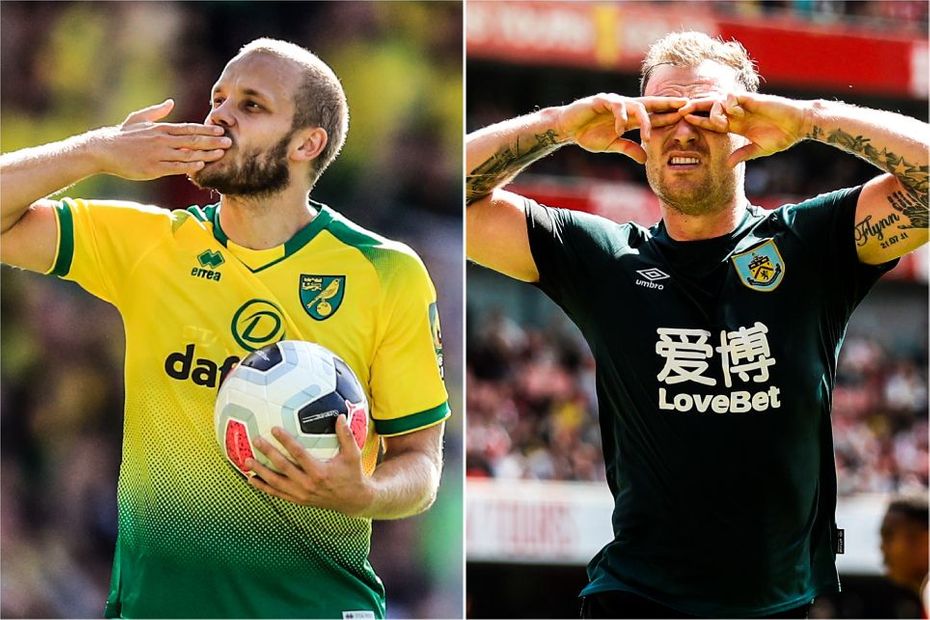 The rush is on to acquire Teemu Pukki (£6.7m) in Fantasy Premier League after his hat-trick and 17-point haul in Gameweek 2.

The Norwich City striker served notice of his potential by scoring at Liverpool in the season opener at Anfield.

And his weekend treble at home against Newcastle United has taken him to the top of the FPL forward standings on 24 points.

It has also persuaded a massive 398,000+ managers to snap up Pukki for his home encounter with Chelsea in Gameweek 3.

Ashley Barnes (£6.6m) is second only to Pukki for new owners up front ahead of Friday’s 19:00 BST deadline.

The Burnley man has already earned over 96,000 transfers in for his trip to Wolverhampton Wanderers.

Barnes has scored three goals in the first two Gameweeks, striking twice against Southampton and then finding the net against Arsenal on Saturday.

Along with Pukki, his underlying statistics are hugely impressive.

The pair rank among the top three players for both shots inside the penalty area and shots on target.

These strong starts from Pukki and Barnes continued the trend from 2018/19.

Last season, 19 forwards scored 10 or more goals in the Premier League. As many as 12 of them started at a price of £7.0m or under in FPL.

That highlights the potential offered by strong cut-price forwards.

By pinpointing those in form, managers can free up cash to invest in midfield big-hitters such as Mohamed Salah (£12.5m) and Raheem Sterling (£12.1m).

Lee Bonfield (@FPLFamily): Who needs Sergio Aguero (£12.0m) and Harry Kane (£11.0m) when the value forwards are scoring hat-tricks? The Pukki Party is in full swing. And, with Barnes scoring three goals in two games and the likes of Che Adams and Neal Maupay looking sharp at £6.0m, FPL managers are finding a lot of value up front so far.

Ben McNair (@drbenmcnair): I always look to budget forwards as they tend to do better than budget defenders and midfielders. There looks to be a greater number of good options now than we've seen for a few years. Assembling a front three of Pukki, Barnes and Diogo Jota (£6.5m), for example, with premium midfielders and defenders could prove an excellent strategy.

Mark McGettigan (@FPLGeneral): There is so much value in the likes of Pukki and Barnes that I'm happy enough to roll without a £10.0m+ forward. We've got premium "forwards" in Salah and Sterling in midfield so we don't need them up front. Watch Kane score a hat-trick now...

Holly Shand (@FFCommunity_): It could be a risk to overlook Kane, with his fixtures. I've got Joshua King (£6.5m) but am wondering whether to look elsewhere given his fixture against Manchester City this week.

Sam Bonfield (@FPLFamily): The budget-friendly forwards are really spoiling us. As well as Pukki and Barnes, we've had goals from the likes of King, Danny Ings (£6.0m) and Billy Sharp (£6.0m) so there are plenty of options that enable us to have in-form big-hitters like Sterling, Kevin De Bruyne (£9.6m) and Pierre-Emerick Aubameyang (£11.0m). The difficulty is not only working out which of the bandwagons to get on but also how many of these forwards to choose. For me, one big-hitter (Kane) along with two budget strikers (currently King and Adams) feels the best way to balance my team. But I'm looking at swapping Adams for Pukki.

Ash (@FPLHints): In FPL, form is king so we can't ignore Barnes and Pukki as the must-have budget forwards. When Burnley and Norwich score, the chances are they'll be involved. An honourable mention must also go to King.

Paul Gee (FPLPaulGee): Pukki is a predator in front of goal, although he won't play Newcastle every week. Barnes is another great selection and both players are due for an upturn in fixtures soon. But we cannot overlook Kane this week against the new Huddersfield Town.

Neal Thurman (@nealjthurman): This was a week for bargains proving themselves valuable. Moving from mid-range guys like Callum Wilson (£8.0m) and Ryan Fraser (£7.4m) to Pukki and Dani Ceballos (£5.6m) can free up the funds to bring in another premium player.

Part 2: GW2 Lessons: De Bruyne back to his best