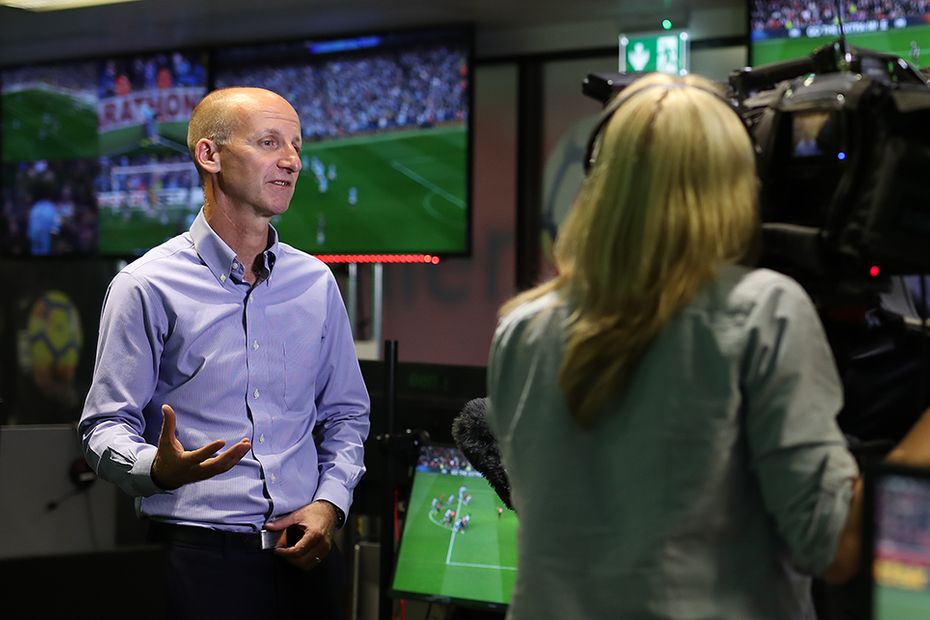 Child and Halliday to retire as assistant referees
Clubs agree to introduce VAR from 2019/20 season
Hooper: To be at the top is a real honour

While the 2018/19 Premier League season was concluding in thrilling fashion, in a room to the west of London, 30 people were watching the action on more than 70 screens.

These are the people who next season will be bringing Video Assistant Referees (VAR) to the Premier League. Sunday represented their final chance to test on live Premier League matches before the 2019/20 season kicks off on 10 August.

Mike Riley, Managing Director of Professional Game Match Officials (PGMOL), the organisation responsible for the operation of VAR, explained about the system.

Why was VAR introduced?

Over the years there have been some high-profile matches around the world where, through no fault of their own, match officials make mistakes. Those mistakes have had an impact on the outcome.

Immediately people can see things on TV, on their phones, and know mistakes have been made. So if you have that power of technology, why not harness it to help what is happening on the pitch?

While VAR will not capture everything, it will help us make more better decisions. But it will not stop the debate over decisions next season.

How does VAR work?

VAR looks at four key areas: all goals scored; penalty kicks, whether they're awarded or not; direct red-card offences - not second yellow cards but straight reds; and any case of mistaken identity.

There will be a VAR and an Assistant VAR for each match at our hub at Stockley Park, outside London. They will look at those four key areas and can request from a replay operator any angles of incidents. The operator can provide them with replays in normal speed or in slow motion.

The officials will use that information to work out: "Is what the on-field match official team did clearly and obviously wrong in those four key areas?"

How quickly will decisions be reached with VAR?

From 68 live trial matches over the last two seasons, in the FA Cup and EFL Cup, we have found to have seriously reviewed about eight incidents every match, taking on average 29 seconds.

We found that in 95 per cent of those incidents the check was complete before the time the match was restarted, so we don't expect it to impact the experience in the stadium.

The longest check was 118 seconds, at Southampton v Derby, where there were difficult offside situations all in one incident.

We have changed a decision, after a review, 14 times in the trial matches and on average it has taken us 90 seconds to complete those reviews.

We aim to make it quicker, but at this stage we don't think that's a bad trade-off to get the right decision.

Will Premier League match officials be operating the VAR system?

Yes. There will be a panel of Premier League referees who are VARs and we're recruiting five Championship referees to act as VARs as well.

The assistant VARs will come from current assistant referees in the Premier League, as well as two former assistants who officiated their final match last weekend, Steve Child and Andy Halliday.

How much will VAR improve the ratio of correct decisions?

The combined Key Match Incident (KMI) accuracy of referees and their assistants is 82 per cent this season.

If we correct the factual errors, such as really tight offside calls, that accuracy will improve considerably.

There have been 35 really tight offside calls, so if we get 35 better decisions next year, taking at worst 90 seconds, that's a good place to start.

We hope to get others decisions corrected, such as subjective errors where there is a clear and obvious error. Together we expect to improve KMI accuracy to 87 per cent.

Will this clear up all referee mistakes next season?

In testing, there's no unanimity. Different VARs came up with different outcomes.

What you should not ask yourself is: "Do I think it's right or wrong?" The question is: "Is what the match officials have done a clear and obvious error?"

We keep a very high bar for that intervention.

There will still be decisions where someone thinks it's a yellow card and another thinks it's a red. But the referee hasn't made a clear and obvious error.

You could end up with different outcomes for the same type of incident, so it protects the referee's authority to make the decision on the field of play.

How will fans in stadiums know VAR is checking?

If the game stops for checking an incident, this will be displayed in the stadium, on the scoreboard or a screen, as well as over the PA system, explaining why and what the outcome of that check is.

We hope, over the next year or two, that we will end up with a process that enhances the stadium experience and will ultimately benefit the game.

The broadcasters will have access to the Quad Split, or four different camera angles, which is the same as what the VAR uses.

The broadcasters have done really well, particularly this season, in understanding what the VAR is looking at and putting it on air. And it will only get better next year.

But you won't be able to hear the match officials. The International Football Association Board (IFAB) protocol doesn't allow it.

Will VAR affect the flow of matches?

We're hoping not. We're very conscious that we want to keep the speed and intensity of the game.

At the same time we're expected to make sure we get all the major decisions right, and that we apply that "clear and obvious" criteria to all decisions.

What have you learnt from VAR in other competitions?

The more we all talk to each other, the players, fans, managers, referees, Premier League, the better chance we have to set the threshold for intervention in the right place that suits Premier League football.

Referees are innovative. Right from the start of this project their approach has been: "This will help us get more decisions right, therefore that's a good thing. What can we do in the two-year training programme to make sure that we capitalise on that?"

They've gone into it with determination to learn new processes and improve what they do as a team, so we get those benefits.

We've done a lot of consultation with other sports, particularly rugby union and cricket, where technology's been in use for many years, and all the experience of those officials says it enhances their authority and respect, rather than detracting from it.

What are the challenges of VAR for the on-field referee?

All four match officials are in constant communication with each other, and they've learned to be very good at that.

Now we're adding another voice into that mix, but that's what the training's been about with a lot of live trial matches.

Will referees have to change how they officiate?

One of the most obvious changes will be on a tight offside decision where it's a direct goalscoring opportunity. Here we've had to retrain refs not to blow the whistle.

Referees are also learning better how to describe incidents because it's important for communication with the VAR.

They've learned how to communicate with players but at the same time to listen to what the VAR is saying.