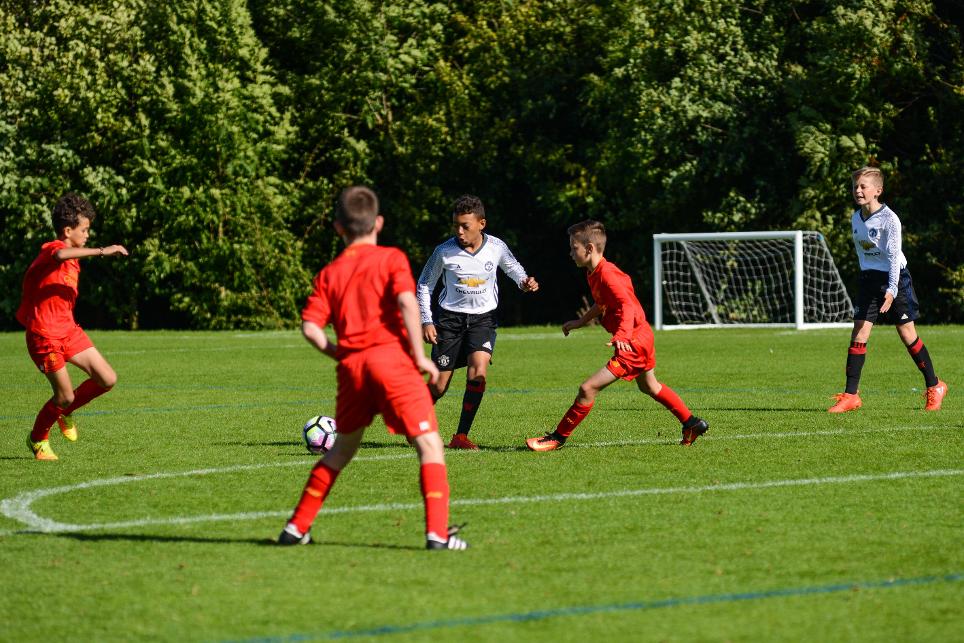 Tony Whelan is a renowned figure in English youth football but even after 26 years at Manchester United he was surprised at how a Premier League Under-11s tournament involving imbalanced numbers stretched the players positively, writes Peter Lansley.

United's head of coaching has worked at the club since David Beckham and the Class of '92 were emerging. Whelan, 64, was impressed by how an innovative, competitive format of playing 'In and Out of Balance' challenged his players in all four corners of the long-term player development plan.

Under 'In and Out of Balance' the under-11s had their psychological, physical, technical and tactical abilities stretched as they faced a variety of game-changing situations.

United were competing with Liverpool, Stoke City, West Bromwich Albion and hosts Derby County in one of eight events staged between 32 academies at the end of September.

The tournaments are part of the Premier League's Games Programme for the Foundation Phase (7-11 years of age) and Youth Development Phase (12-16).

United have been famous for their own youth development, with a great emphasis on training in 4 v 4 scenarios. But Whelan admitted his eyes were opened by such young players dealing with the exacerbated challenges inherent in this format during two hours of almost non-stop football.

"This is the first time they've done this at this age," he said. "If you'd asked me before I'd seen this today, I would have expected they'd be doing it at 12 or 13, not at Under-11s, but it's worked.

"This system helps to creates ownership among the players. It encourages them to become independent decision-makers."

"Some of these players are quite mature now, they're quite bright about the game – some brighter than others – so they can surprise you. I've been surprised certainly by how our players have adapted to it."

The challenges for the team two men down, having to defend despite the disadvantage and retain a compact shape while being stretched physically, were balanced by the incentive of any goals they scored during these six minutes counting double.

"This system helps to create ownership among the players," says Dean Smith, a Games Programme Technical Manager at the Premier League. "It encourages them to solve problems and become independent decision-makers.

"When they are outnumbered such a scenario helps players to develop resilience. With the emphasis of the tournament winners being decided on goal difference, the team which outnumber the other have increased stress to gain advantage during this period and score goals."

"We find that players are required to work as a team, encouraging leadership, communication and teamwork skills."

There was a moment at Derby's Moor Farm training ground when Whelan saw his team counter-attack during one such spell when they were down to five and strike the crossbar.

His reaction was to laugh in delight at the break rather than rue the missed bonus.

"At the end of the day, kids play football because they enjoy it," he said. "It's fun.

"I like that [double-goal incentive]. We lost a game because of that, when the [Derby] lad scored a really good header. So that's been a great idea.

"You have got to understand all the lows, defensively and offensively. This has been a real experience for us."

"It's saying, 'Even though you're up against it, if you get a quick break, you can score a goal that'll win you the game.' It did for them."

One tactical development from the tournament was that several outnumbered teams tended to play with a diamond, ensuring they had the option of an 'out ball' to try and score.

But the pressures of playing with two extra men were also intriguing as the overloaded teams felt the necessity of cashing in on this six-minute spell.

"We've got to score while we've got more players," United players shouted at a team-mate to hurry him up, but that also had downsides because players became too hasty with the ball and lost possession, to their frustration.

Whelan emphasised that learning how to capitalise on having greater space on the field is one of many stepping stones for players of this age.

"This is a step that we will take out of today. It's a good way of trying to make those little steps, because it can't be all at once.

"It's little bits at a time and I'm hoping they understand that because seven-a-side is different to 11-a-side and that's where we are trying to get them to.

"It's trying to say, 'OK, you have got to learn how to play when you are a man down. You have got to understand all the lows, defensively and offensively'. Today, this has been a real experience for us."

"Psychologically and emotionally when they’re 5 v 7 and they go 2-0 down after two minutes, it’s finding out a lot about the boys."

The tournament was decided on goal difference, not points, and with the short matches there was always the incentive of a fresh scoreline.

West Brom could also see the sunny side, regardless of the scores. "Psychologically and emotionally, when they're five players versus seven and they go 2-0 down after two minutes, it's finding out a lot about the boys," Lee Baker, West Brom's lead Foundation Phase coach, said.

"For me, the amount of different outcomes you can get from this tournament, it's fantastic. Technically, the pitches are small so you get loads of touches and different kinds of touches.

"When you've got 7 v 5 it allows them to start recognising overloads and use the football pitch so it's about sharing the ball and it's not 'all about me'.

"It's brilliant because basically the rules of the game and the constraints of the game help the outcomes. It allows them to think for themselves."

"Bless them, some of the lads, because they're 10 and 11 years old, they just want to play," Richard Astle, Derby's head of Foundation Phase, said. "Some of the time, they were 7 v 5 and thinking, 'We've got slow this down a little bit'.

"Other times they're 5 v 7 and they're so eager they'll go and get the ball quickly!"

In total, 125 goals were scored in the 24 matches at Derby, where the hosts were the winners.

"All the staff, players have played the game in the right spirit," Astle said. "It went on goal difference, so it was all about being able to attack and score goals but also being tactically aware enough not to concede and I thought ours coped fantastically with that."

Peter Lansley, an FA Coach Mentor who reports for a range of national newspapers, is a lecturer in Football Journalism at the University of Derby

See: 'Part of their development is to understand themselves'