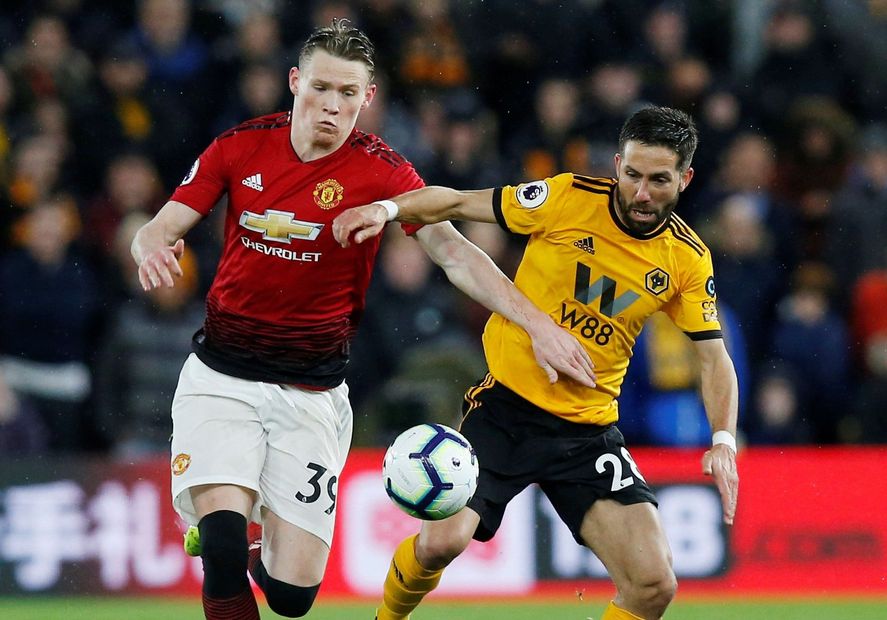 The transformation of Scott McTominay into a box-to-box midfielder by Ole Gunnar Solskjaer has been an interesting development.

McTominay featured in this role for Manchester United at Molineux, where his dynamism caught the eye despite the 2-1 defeat.

The 22-year-old brought energy to a midfield that had been flagging and produced a fine first Premier League goal from outside the penalty area.

He might even have scored more from his five attempts.

Such has been his impact that it will be a great surprise if he does not retain his place for the visit of West Ham United on Saturday.

The Scot has performed solidly at the base of a three-man midfield against Liverpool, Crystal Palace and Southampton.

Showing great mobility and discipline in that defensive position, he broke up play and kept his distribution neat and tidy.

McTominay proved there is more to his game against Paris Saint-Germain in the UEFA Champions League last 16, when he shone on the right of midfield in United's 3-1 success in the French capital.

It was in that same role that he impressed at Wolves. Working tirelessly across the middle third, he retained possession well and drove forward at the right times, demonstrating another side to his game.

In an assertive display, McTominay won 12 duels, nine aerial contests and made two interceptions, more than any team-mate in that defeat.

Solskjaer also highlighted McTominay's contribution with and without the ball during Wednesday's UEFA Champions League 1-0 first-leg defeat by Barcelona.

"It was a fantastic game for Scott," the manager told Man Utd's official website. "He's a great athlete, he can run all day long. He wins challenges, he's quick on his feet.

"He was composed, brought the ball down a few times.

"Every game he plays he grows and grows, and today he was one of the first ones to take the ball down and settle us."

Based on these outings, Solskjaer may now consider McTominay to be more of an attacking option in the remaining weeks of the campaign.

He has definitely looked more comfortable performing those duties than as an auxiliary central defender under Jose Mourinho earlier in the season.

He is not as technically gifted as some team-mates, but McTominay's running power can give United a different dimension.

In each of his last four PL starts the academy graduate has played at a high tempo and covered more than anyone on his side.

From a tactical perspective, Solskjaer may use McTominay's energy to break the lines inside the middle third and launch the counter-attacks his forwards enjoy.

If the Scot starts against West Ham in this capacity, do not be surprised to see him regularly trying to run behind Mark Noble.

His physical advantage over the Hammers captain could well have a crucial bearing on the match.

Part 1: Improved service behind Vardy's revival
Part 3: Imperious Van Dijk in a league of his own
Part 4: Playing Ozil can make Arsenal feel at home