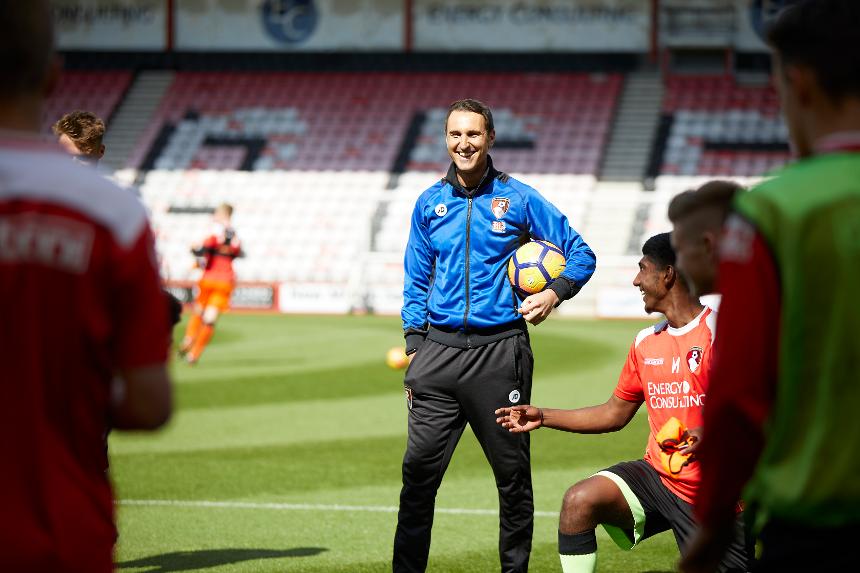 The Elite Coach Apprenticeship Scheme (ECAS) is a two-year, intensive programme aimed at accelerating the development of coaches who demonstrate the potential to be elite coaches in youth football.

AFC Bournemouth's Lead Youth Development Coach Graham Mills is about to head into his second year.

Having had a front row seat to AFC Bournemouth's charge up the football league in recent years, Mills admits that the club has changed almost beyond recognition in the six years he's been on board.

One of the League's newer Academy structures, in place since the start of the Elite Player Performance Plan (EPPP), AFC Bournemouth's Academy are aspiring to match the success of the first team in recent seasons.

The EPPP puts the holistic development of the player at its core, with tournaments designed to provide extra-curricular, cultural and educational opportunities, alongside elite competition on the pitch.

This season, home-grown player Baily Cargill made his Premier League debut at Manchester United - and was presented with his debut ball to mark the occasion.

As part of ECAS, Graham also recognises the need to continue developing his own skillset. He says, "When I joined the club, it was in a very different place to where it is now.

"The whole infrastructure has changed. We want to develop our own players and provide the platform for them to perform in the Premier League."

With young English manager Eddie Howe at the helm, Graham says it's testament to his management that despite the rigours of the Premier League, that he still keeps an eye on the talent coming through.

"To see Eddie do the job that he has done is phenomenal," Graham explains. "He knows the club inside out, he's very hands on and even when the first team are performing well on a match day, he’s still developing players and that’s a huge credit to him and his support staff."

Graham is also full of praise for his ECAS experience to date, "As a coach you're always looking to improve, and that’s one of the main things I've taken from ECAS.

"On most coaching courses it's usually just declarative knowledge; tactical and technical detail, and often the procedural stuff like communication, body language and developing rapport - the softer skills - are neglected.

"So having the opportunity to not only learn about that, but also having a mentor who acts as a critical friend and to give you feedback is so important.

"The opportunities afforded on ECAS are very much 'money can’t buy', to spend time at the Royal Shakespeare Company, a few days up in the Brecon Beacons with ex-military and some time in Germany and Holland, to learn from coaches there is brilliant.

"It's a fantastic journey to be a part of, to have a player come in at the age of nine, and then progress through the ranks to the first team is as good as it gets as a coach."