Our international broadcasters are committed to bringing their viewers closer to the atmosphere of Premier League matches. Norway's TV2 went to extremes to get their fans closer to the action. 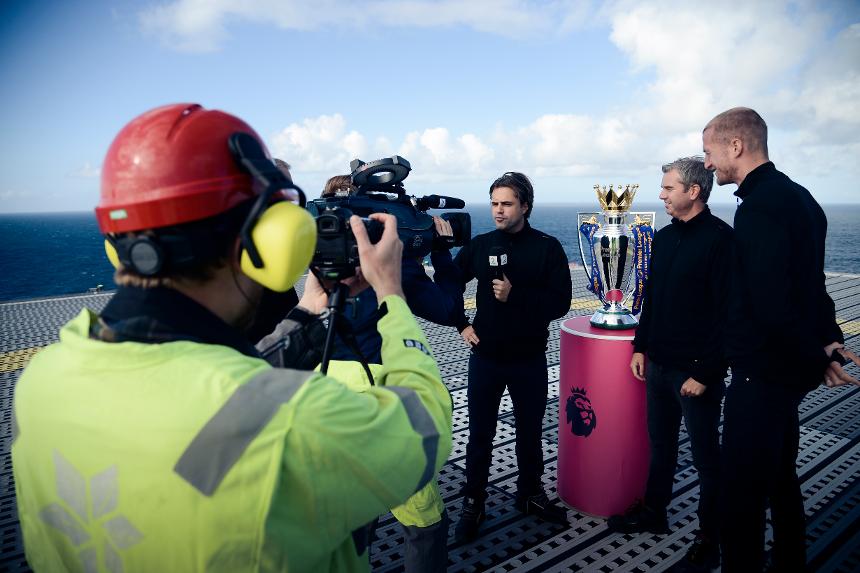 The middle of the North Sea is not necessarily where you would expect to find a group of dedicated Premier League fans.

But thanks to TV2 Norway, this season the Premier League reached unchartered waters, with a live broadcast of Liverpool FC v Hull City AFC from a gas rig in the North Sea.

Aase Husebø is one of many Norwegian Liverpool supporters working on the rig.

"We have a relationship with the town of Liverpool because a lot of Norwegian sailors were based in Liverpool during the war."

In fact, the word 'Scouser' comes from a Norwegian food called 'lobscouse' - a stew eaten by Norwegian sailors that the Liverpudlians also developed a taste for.

"I became a Liverpool fan when I was a young girl. They were the best team in those days, with great players like Kenny Dalglish.

"We look forward to the start of the Premier League and we travel a lot to England. If you go to English football matches there are a lot of Norwegians.

"When we can't go, we do like the TV2 broadcasts and of course Erik Thorstvedt and Brede Hangeland are great names in Norway."

Perhaps it should be no surprise that TV2’s Premier League broadcasts are so popular in Norway - recent research has shown that 37% of Norwegian adults are interested in the Premier League.

Norwegians are also the nationality that are the most likely to include watching live football during a trip to Britain, whilst Solksjaer, Flo and King are amongst the 63 Norwegians who have played in the Premier League to date.