Building on the outstanding work of clubs like West Bromwich Albion, our new partnership with BT is creating more opportunities for disabled people to enjoy playing sport. 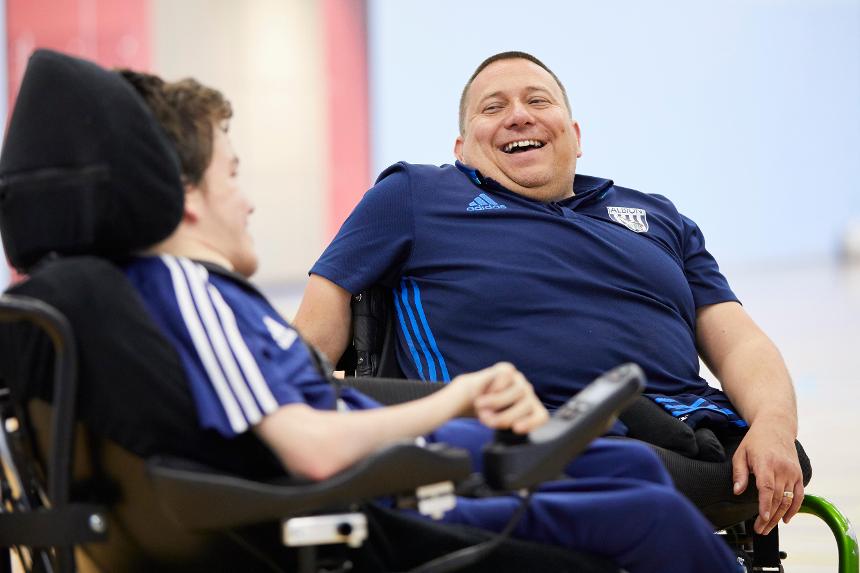 Described by the Director of The Albion Foundation, Rob Lake, as "once met, never forgotten", Paul Hunt is an infectiously enthusiastic person to be around.

He thrives on inspiring others to always have a go and is passionate about football.

But as a young boy, playing football meant something very different to Paul than it does to most children, as he was born with Sacral Agenesis, a rare condition that meant his spine had not developed as normal.

Today his passion and energy for football is directed towards Powerchair football, where four players on each team use powerchairs equipped with footguards to attack, defend and spin-kick a 13-inch football to score goals.

“I used to play football by crawling around on my hands," he says. "There was nothing like this available when I was growing up.

Paul is a fantastic example of how hard work, positivity and determination can overcome major challenges. After a PE teacher he worked with told him about a job he might be interested in, he has never looked back. Ten years later Paul is Senior Disability Development Officer at The Albion Foundation.

Paul’s proudest achievement is the Powerchair football programme he has set up at The Albion Foundation: “When I started the programme in 2006 we had four participants – we now engage with almost 1,500 each week," he says.

"I’m also very proud of our partnership with Queen Alexandra College in Harborne. We aim to prepare the students with vocational skills for life after college. They have all done a Level 1 coaching course and a powerchair football introductory course.”

And the programme is having a significant impact locally and further afield.

“It’s been hard work but it’s so rewarding when you see people progress. We are doing Under 8s Powerchair football now and it’s great seeing the youngsters come through.

“I like to help other disabled people access sport. The people on our disability programmes become friends, which is really important. It’s certainly better than just sitting in the house playing computer games.”

This season Paul was publicly rewarded for his hard work and success in setting up the Disability department of the Foundation. He accepted his "Outstanding contribution to disability" honour at the Albion Stars event held to mark 25 years of the work of the Foundation.

The Premier League/BT Disability Programme was launched this season. It seeks to help remove the barriers that mean that disabled people are half as likely to participate in sport as non-disabled people.

Clubs will have a designated Disability programme co-ordinator, whose role will be to work with local organisations to provide new sport activity specifically for disabled people. In addition, clubs will seek to make their existing programmes as inclusive as possible, so that disabled people can take part in a wider range of activities.

Burnley fan Joe Skinner, who has cerebral palsy, was at a match against Ipswich Town in 2013 when former striker Danny Ings came over to say hello.

That meeting had a significant impact on Joe, who then helped Ings create the Burnley FC in the Community disability project and is now is a successful volunteer coach at Turf Moor.

The project now engages with up to 800 disabled people every week and this season's launch of the Premier League/BT Disability Programme will allow Burnley FC in the Community to triple their current disability sport provision.

"To make a difference to disabled peoples' lives and to be seen as accepted within society, it makes me feel like I am part of something."