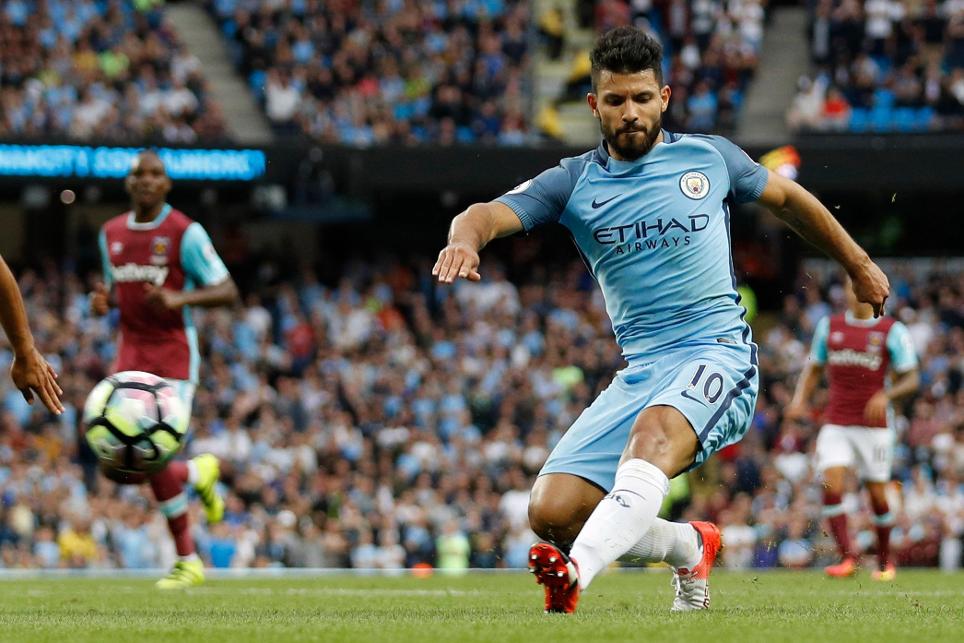 Which of Pep Guardiola's attacking options will step in for the suspended striker at Old Trafford? The Scout investigates

Quiz: Which City summer signing are you? External Link

Having scored three times in as many matches, Sergio Aguero (£13.0million) proved a popular component of Fantasy Premier League frontlines in the first few rounds of fixtures.

Despite his starting price, the Manchester City forward was second only to Zlatan Ibrahimovic (£11.8m) in terms of ownership heading into the Gameweek 3 encounter against West Ham United.

Aguero’s altercation with the Hammers’ captain Winston Reid (£5.0m) changed all that.

A subsequent three-match ban for violent conduct, which sidelines him for Gameweeks 4-5 and an EFL Cup trip to Swansea City, has triggered a major exodus as FPL managers scour the market for replacements.

Pep Guardiola does not have the same luxury.

With Aguero set to miss the upcoming Manchester derby trip to Old Trafford, in addition to next weekend’s home clash against AFC Bournemouth, the City head coach has decisions to make up front.

Guardiola may well continue to employ the 4-1-4-1 formation that has harvested three successive wins and earned City a place at the summit of the Premier League.

He could hand Kelechi Iheanacho (£6.9m) the chance to lead the line in Aguero’s absence.

The youngster scored eight times in seven starts in 2015/16, with his average of 105.9 minutes per goal second only to Aguero (101.8 minutes) in the Premier League. Iheanacho also found the net for Nigeria in the recent round of international fixtures.

Alternatively, City have a trio of wide men capable of playing as a 'false nine' should their manager tinker with his tactics.

Raheem Sterling (£8.2m) is the in-form option. After scoring twice against the Hammers, he has been snapped up by over 202,000 FPL managers since the Gameweek 3 deadline has passed, more than any other player.

Guardiola may be loath to move Sterling away from the flanks, though. His speed and trickery have been a key facet of the league leaders' play.

The Spaniard netted 25 times in his final two seasons with Celta Vigo and, like Sterling, has bagged a two-goal haul in the first three league encounters.

Nolito has averaged an effort on goal every 32.2 minutes this term compared to Sterling’s 40.9.

Typically utilised on the left flank, his potential move up top could allow Sterling to switch flanks, bringing Jesus Navas (£6.5m) back into the first XI on the right.

There is also another new acquisition, Leroy Sane (£7.9m), hoping to make an impression.

Having stepped up his fitness over the international break, the summer capture from Schalke is pushing for a return to action ahead of the Manchester derby.

More comfortable on the flank, the versatile Germany international could even deputise through the middle if passed fit.

Sane averaged an effort every 34 minutes in the Bundesliga last term on his way to producing eight goals and six assists.

During his stints in charge of both Barcelona and Bayern Munich, Guardiola has proven particularly inventive when required to make tactical tweaks.

With old foe Jose Mourinho awaiting him at Old Trafford on Saturday lunchtime, the Spaniard’s solution to the absence of his top scorer promises to be a fascinating one.