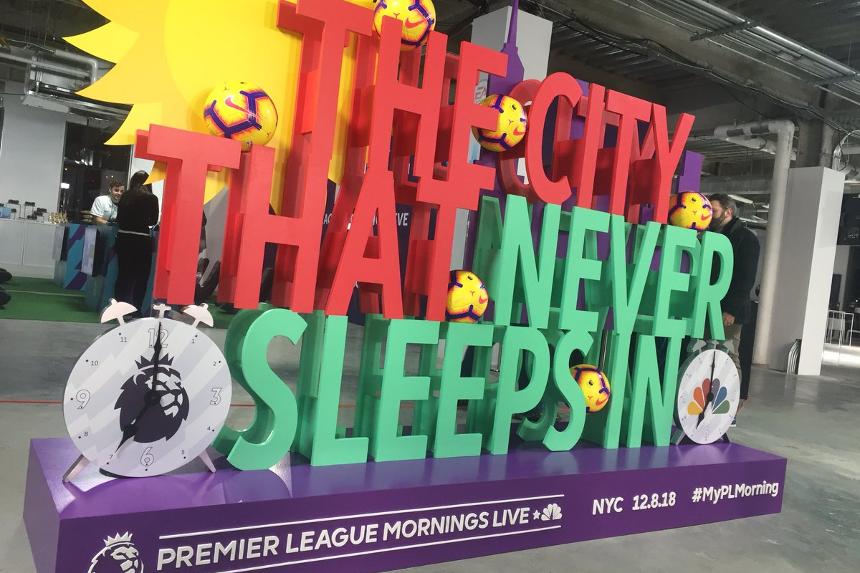 The latest "Premier League Mornings Live" fan fest came to New York on 8 December as the largest-ever celebration of the Premier League to date in the US.

Not only were there extra Premier League matches to enjoy across the day, but the NBC Sports studio team and Premier League fans were joined by some extra-special guests.

Premier League Champion and the competition’s all-time goalscorer Alan Shearer was at the event at New York City’s South Street Seaport, in Manhattan, and was joined by Marcus Mumford and Winston Marshall from Mumford & Sons.

Shearer had already been enjoying life in the Big Apple.

As well as a visit to the top of the Empire State Building, the former Newcastle United and Blackburn Rovers forward met the New York Rangers NHL team, where Shearer also got on the ice to try his hand as the Rangers' Zamboni driver.

Shearer was also joined at Saturday's event by hundreds of fans and former Manchester City and US national team player player Claudio Reyna.

The former @ManCity player loves to see the growth of the game stateside. pic.twitter.com/FeIwvkUiJj

In addition to the four matches that were shown back-to-back the event featured an indoor pitch, the Premier League Trophy, club mascots and an EA SPORTS FIFA 19 gaming zone, airbrush tattoo and pancake artists, special giveaways and more.

David Luiz makes it a 2.0 on the Richter scale for @ChelseaFC 🔵⚽️🥅🗽 #MyPLMorning#CHEMCI 2-0 pic.twitter.com/HEUvMunigB

How fans outside New York joined in

For those fans who could not attend, NBC Sports presented "live look-ins" from Premier League viewing parties across the country, including at locations in Dallas, Louisville, and San Diego (see below for location details).

Fans also tweeted with #MyPLMorning to be featured on-air and in the on-site social activation that was displayed in monitors throughout the venue.

You can find these locations with the Premier League's all-new USA Bar Finder.

The Bar Finder provides Premier League fans in the US with the locations of more than 230 bars in 40 cities.

It offers fans the chance to enjoy the best experience of watching their teams in action on NBC Sports with other passionate supporters.

The site allows them to go to bars affiliated to their clubs so they have people with whom they can share their passion for their teams.