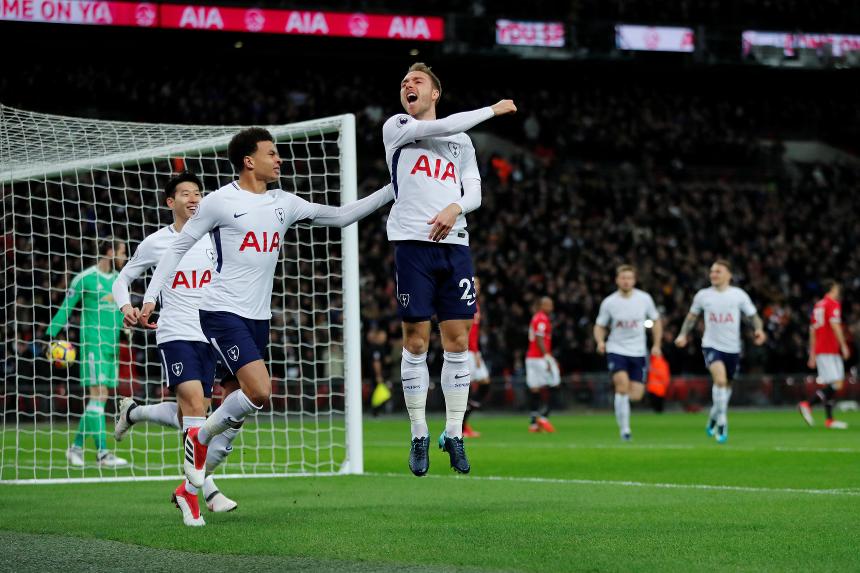 Spurs midfielder describes scoring third-fastest goal in PL history as, a year on, he again prepares to face Man Utd

King's relief after goal confirmed as fastest in Premier League

Ledley: “Some players just have it. Rafa had it.” External Link

As Christian Eriksen prepares for Sunday's home match against Manchester United, he will have fond memories of last season's fixture, which also came in January at Wembley Stadium.

The Tottenham Hotspur midfielder scored inside the opening 11 seconds while sending his side on their way to a 2-0 victory.

His strike was the third-fastest Premier League goal ever.

Here the top three players share their memories of their strikes:

For Eriksen, the goal at Wembley marked a rapid reward for a player who had missed the previous two Spurs matches.

"It's the perfect way to come back - to score with your first touch!" he told Spurs' official website.

"It's never happened before and probably won't happen again but it was a very good start.

"Everything fell perfectly for me, even the ball was laying down there nice and quiet and all I had to do was step up and kick it in - the perfect start to a very good game."

Shearer found that his years of hassling from opposition kick-offs paid off at St James' Park as his rapid strike set Newcastle United on their way to a 2-0 win.

"Manchester City had kick-off and, as I always used to do, I chased the ball, trying to put them under pressure," Shearer told premierleague.com.

"I knew that their goalkeeper, Carlo Nash, was not a regular - Peter Schmeichel was injured - so when Sylvain Distin passed it back to Nash, I set off to close him down.

"Then I saw Nash miscontrol it and put in a sprint. His clearance apparently hit my arm but at the time I wasn't sure. I wasn't going to stop to wait for the ref and put the loose ball in the back of the net.

"I have never scored a faster goal in football and have rarely had such success chasing down goalkeepers, but if you don't buy a ticket you don't win the lottery!

"If you don’t buy a ticket you don’t win the lottery!"

Ledley King was able to set the Premier League record thanks to a move from defence into midfield by the Spurs manager at the time, George Graham.

This move might have caught out Bradford City too, after they failed to pick him up from kick-off.

Apart from the speed of the goal in the 3-3 draw at Valley Parade, the feat has special memories for King as it was his first senior strike for the club, even if its quality did not fill him with much pride.

"To be honest, it's not even a good strike," he said. "It needed that deflection to go in. I just had so much space and once I had my first touch I was already thinking about trying to get a shot off.

"There seemed to be no one around me - maybe for a reason!

"But it was my first senior strike, so great memories."