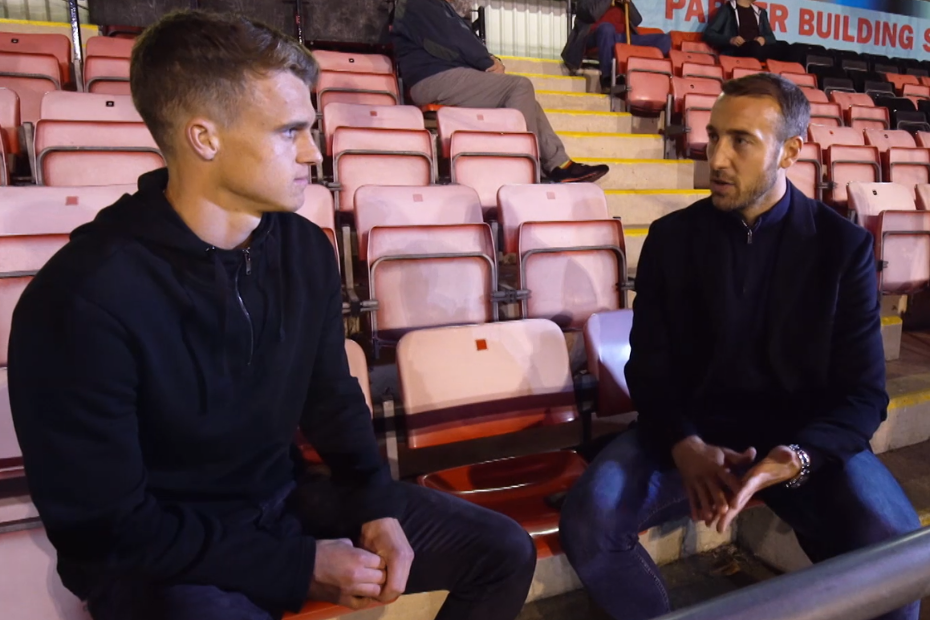 Ahead of Non-League Day on 13 October, two Brighton & Hove Albion players who both rose to the Premier League via non-league football visited nearby Lewes FC, who play in the Isthmian League Premier Division.

Glenn Murray started out at Barrow in the sixth tier of English football before edging his way up the pyramid to become one the top scorers in the 2018/19 Premier League so far, with five goals.

Accompanying Murray was Brighton team-mate Solly March, who was on the youth books at Lewes, his local club.

'It makes you humble'

"It gave me a good platform to start my career," March tells Murray for BBC's Football Focus. "I guess it’s a different route to what a lot of people take.

"It makes you realise what you have in the Premier League and the luxuries you get with that. It makes you more humble."

For Murray and March there were some familiar faces as Lewes took on local rivals Worthing in a home derby.

They also saw that much is different at Lewes’s Dripping Pan stadium. There is a 3G pitch, built four years ago with funds from the Premier League and The FA Facilities Fund, which provides Lewes’s junior teams with guaranteed matches whatever the weather, as well as hosting training sessions for the ladies’ team.

The Dripping Pan has also changed much over the past 10 years. Grants from the Premier League-funded Football Stadium Improvement Fund have helped to build two new stands that make the Dripping Pan one of the most picturesque venues in the non-league game.

All these improvements help to attract local people to the club to watch and to play, and for youngsters at Lewes, seeing the path that March took will give their hopes of the big time that extra boost.

'There is talent in non-league'

"When you are playing Under-18 football in front of about 20 people it is a long shot but that hope is always there and there was always that small bit of belief," he says.

"There is definitely talent out there [in non-league] and people who can do it. They need a bit of luck along the way and that belief and hunger to get there.

As for advice for any future Solly Marches, he says: "Just believe in yourself, never give up. You never know what can happen."