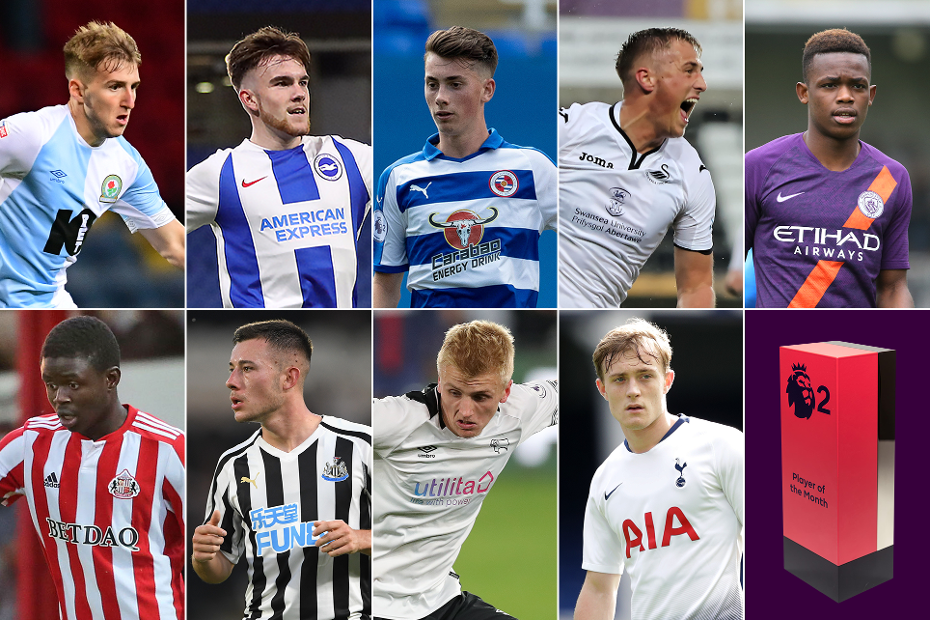 Nine youngsters have been nominated for the Premier League 2 Player of the Month for September.

The shortlist below was chosen by the League's Football Development Panel after PL2 club managers nominated the best performances by opposing players in each of their matches.

Click on the player names for their club profiles.

The 19-year-old forward scored both of Blackburn Rovers' Premier League 2 Division 1 goals in September, including the equaliser in a draw at Swansea City. He also played in the first team's 3-2 Carabao Cup defeat at AFC Bournemouth.

On the list for the second successive month, the 18-year-old forward scored twice as Brighton & Hove Albion stayed unbeaten in PL2 throughout September. He also found the net in a 2-1 Checkatrade Trophy loss to Luton Town.

A 20-year-old midfielder, East was instrumental in Reading's two wins and two draws in Division 2 last month. That included an assist in the 1-1 draw at Manchester United.

The 18-year-old winger scored a hat-trick in Manchester City's 4-1 victory over Swansea at the end of the month to go joint-top of the PL2 scoring charts with six goals. The German also helped City beat Crewe Alexandra 4-1 in the Checkatrade Trophy.

An 18-year-old midfielder, Mbunga-Kimpioka played a key role as Sunderland earned four Division 2 points in September. The Swede also featured in a goalless Checkatrade Trophy draw with Stoke City, and has since made his League One debut in October.

At the age of only 17, the midfielder was one of the stars in three PL2 matches in September, also helping Derby County draw 1-1 with Paris Saint-Germain in the PL International Cup.

A place on the substitutes' bench in Tottenham Hotspur's 4-2 UEFA Champions League match against Barcelona this week was reward for some standout displays by the 18-year-old midfielder in September. Skipp provided an assist in a 2-0 PL2 Division 1 win over Man City before featuring in a 3-1 victory at Blackburn Rovers.