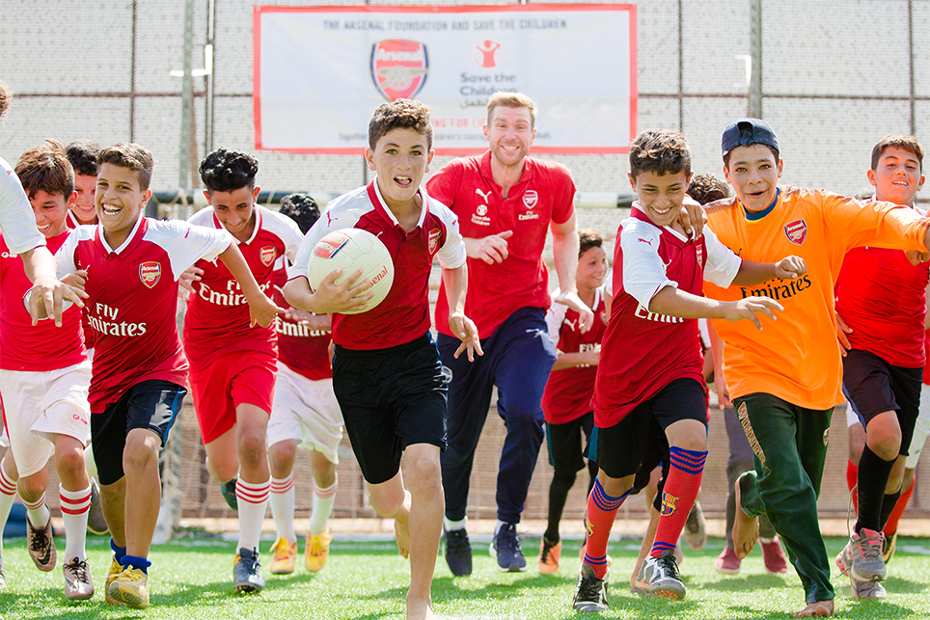 Life for Syrian children at the Za'atari refugee camp in Jordan is hard but Arsenal and Save The Children are giving them hope for a brighter future.

Za'atari is home to 80,000 refugees who have fled the war in Syria, with children making up more than half of the population. One of them is Mohammad.

To help him deal with the trauma of his experiences and to cope with the stresses of everyday life at the camp, Mohammad plays football on pitches built with funding from the Arsenal Foundation's partnership with Save The Children.

"When I'm frustrated at home, I just go to the pitch," Mohammad says. "For me the pitch is something special. I love playing football. I forget everything when I'm on the pitch."

Mohammad told his story to Per Mertesacker when the former Arsenal captain and now Academy manager visited Za'atari to launch Coaching for Life, a new programme from the Arsenal Foundation and Save The Children.

"When children suffer, we all lose," Mertesacker says. "People here have fled their country and I have no experience of that, so I talked to them and learnt a lot. It was a privilege for me to visit.

"The young people I met focus on what is happening now and this project will give them courage to cope with the struggles they face day to day, as well as providing them with the skills to have a better future."

Coaching for Life aims to reach 4,500 girls and boys over three years. It is made up of seven coaching modules that will address issues such as emotions, communication, decision making, self-esteem and conflict management.

Through football, children like Mohammad will develop these skills as well as learn about their rights and the importance of gender equality.

"Football teaches me respect and I'm excited to learn more skills from the coaches," Mohammad says.

The programme will also incorporate a "Train the Trainer" model, where Arsenal coaches will teach the modules to 45 local coaches in Jordan and Indonesia, who can then further and broaden its impact.

"Children living in Za'atari have experienced things that no child should ever have to," Save the Children Jordan CEO, Rania Malki, says. "Children will be encouraged to visualise their dreams and hopes for the future and identify ways to achieve them.

"The goal is clear: together Arsenal and Save the Children will give these children back their childhoods and coach them towards a better future."