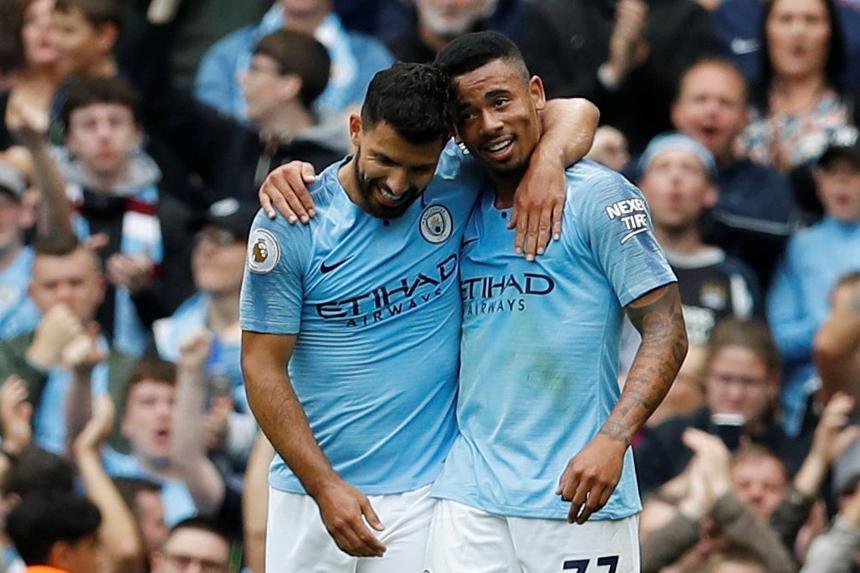 When the Manchester City teamsheet comes out on Saturday, fans and players of Wolverhampton Wanderers might be hoping to see two familiar names split up.

Sergio Aguero and Gabriel Jesus started up front together in the Premier League for only the ninth time as City put six goals past Huddersfield Town on Sunday.

Aguero scored a hat-trick, while Jesus was also on the scoresheet, and the latter believes playing as a pairing can further boost the attack of the team whose 106 goals last season were the most of any team in Premier League history.

"Usually when we play together we do a great job," Jesus told City's official website. "We can indeed play together! Sergio and I have the spirit of scoring goals and always try to finish well."

The stats back up Jesus's view that City score more goals when both strikers start.

Since Jesus joined in January 2017, Pep Guardiola's side have played 57 matches in the top flight.

Aguero has started up front without the Brazilian in 27 of those, with City scoring 66 goals at an average of 2.44 per match.

In the 19 that Jesus has started without Aguero alongside him, that average rises to 2.74.

But in the nine matches that the two have started together, 32 goals have been scored at an average of 3.6.

That average dropped to 1.5 goals per match in the two matches where neither started, highlighting their importance to City's attack.

Despite their improved scoring rate when they start together, the pair's link-up play for goals can still improve.

Although Aguero has set up four goals for Jesus, the Brazilian has yet to return the favour in the PL, something he will hope to have the chance to do at Molineux this weekend.