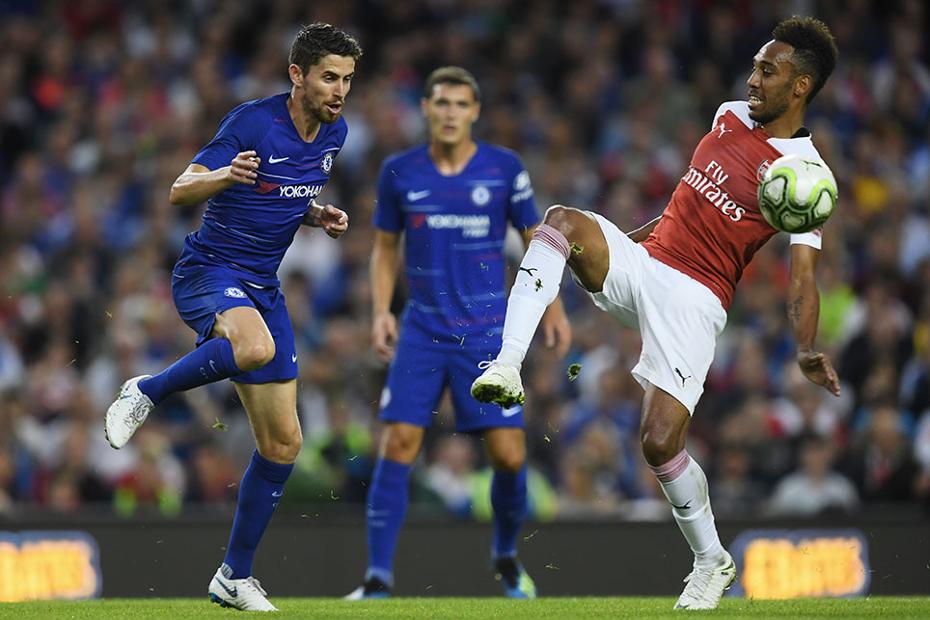 Saturday is a meeting of two teams in transition. Both are working hard to embrace fresh ideas from their new head coaches.

They had contrasting fortunes in Matchweek 1, with the Blues winning 3-0 at Huddersfield Town and the Gunners losing 2-0 at home to Manchester City.

Of the two teams, Arsenal pressed more effectively than Chelsea at the weekend.

Emery asked three of his four most attack-minded players to harass Man City’s defence in advanced areas and this forced several dangerous turnovers.

At least one of those situations should have been punished with an Arsenal goal, but the finishing was wayward.

Emery should note that Huddersfield regained possession inside their attacking third more often than any other PL team in Matchweek 1, against Chelsea.

This indicates that the Blues, who will try to pass out from the back under Maurizio Sarri, are vulnerable to a well-coordinated press.

Sarri brought in Jorginho as his deep-lying playmaker, to act as his chief conductor at the base of his midfield.

At John Smith’s Stadium the Italian impressed on debut, making 62 accurate passes out of 66.

With his instant distribution, he found Chelsea’s more advanced midfielders regularly. This will give extra space for Eden Hazard, Willian or Pedro.

Do not be surprised if Aaron Ramsey is instructed by Emery to keep him quiet.

Ramsey was used in an advanced No 10 role on Sunday and, even though he was below par, his aggressive closing-down may be an asset.

He could harry Jorginho and disrupt the service into him.

Runners from deep are also going to play a key part in Sarri’s strategies this term.

N’Golo Kante made a long sprint to score at the far post against Huddersfield, and Marcos Alonso timed a forward burst from left-back into the penalty box to earn a spot-kick.

The two midfielders either side of Jorginho at Huddersfield - Kante and Ross Barkley – will be given licence in particular to go forward.

Arsenal must be aware of this if they wish to contain the hosts.

Gunners to exploit right side?

At the other end of the field, Chelsea’s switch to a back four will take time to master.

Defenders David Luiz and Antonio Rudiger coped quite comfortably on Saturday, but it is a fledgling partnership protecting a new PL goalkeeper in Kepa Arrizabalaga.

The left-back position is also a potential concern.

Alonso is an excellent and adventurous full-back, but in a back four he does not always look secure defensively.

Huddersfield delivered 11 of their 18 crosses in the match down his flank, which may give Emery food for thought.

If Arsenal’s right-sided players are given that many opportunities to deliver into the area, it could be good news for Pierre-Emerick Aubameyang and Alexandre Lacazette.

Part 2: Wingers will be central to hopes of Cardiff
Part 3: Brighton have their own Pogba in Bissouma
Part 4: Wan-Bissaka has the tools to stop Mane