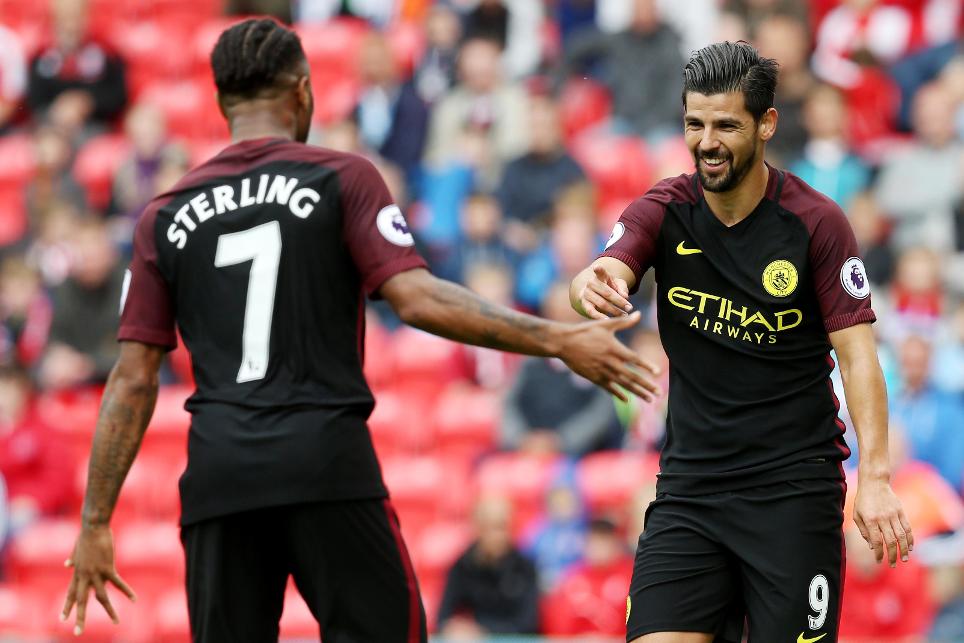 Noble - We have a special team spirit External Link

Slaven Bilic's West Ham United made a habit of upsetting the odds last season, beating everybody in the top eight aside from the champions Leicester City. Can they repeat their 2-1 win at the Etihad Stadium last year to take the first points off Pep Guardiola’s high-flying Manchester City on Sunday?

Ahead of an intriguing encounter at the Etihad Stadium, tactics expert Adrian Clarke picks out some areas of interest.

There's nothing revolutionary about the formation Guardiola has deployed in his first two league matches. In essence Mancheser City line up in a 4-1-4-1 shape, the same as West Ham.

It's how the City head coach asks his players to perform within that framework that’s unconventional.

As shown in the average position map (below) Guardiola effectively splits his outfield starters into two separate five-man units, which is something we've rarely seen in the Premier League.

There are two fundamental differences to the way City played last term under Manuel Pellegrini.

Firstly, the full-backs aren't expected to fly forward and provide the same ammunition from the flanks.

In 180 minutes of action in 2016/17, City’s right-backs have delivered not one cross from open play. On the left, a total of three crosses (two from Aleksandar Kolarov, one from Gael Clichy) have been whipped into the box.

Under Guardiola you're more likely to see their full-backs in central midfield backing up play, protecting the middle ground from a counter-attack threat.

The other alteration is in central midfield, where City are deploying a pair of adventurous playmakers behind Sergio Aguero.

With the head coach discouraging David Silva and Kevin de Bruyne from asking for the ball in deep areas, you'll regularly see both dropping off from a secondary striker's position to receive a pass.

This tactic has emptied the middle third on occasion, creating extra space for City to build up play.

Knowing his side will see less than 50% of the ball, West Ham will start this contest with six or seven outfield players who are defensively strong. Solidity down the spine is the Croat’s priority.

Unlike City's box-to-box midfielders, Mark Noble and Cheikhou Kouyate will drop deep to defend and receive passes, as well as bursting forward when the time is right.

Rather than designing his 4-1-4-1 to spread out and be expansive, Bilic wants the Hammers to stay compact, breaking forward from a firm base.

Wingers with chalk on their boots

City's wide men have enjoyed a productive start to the new campaign.

Instructed to stay as wide as possible when play is building up, and with full-backs noticeably less inclined to clog up their space by overlapping, Raheem Sterling, Nolito and Jesus Navas have all impressed in positive one-against-one situations.

The shape of the side has helped manufacture a little more space for them to work in down the flanks, and their contributions have caught the eye.

Sterling has looked razor sharp. Running with renewed purpose, the only thing missing from his early-season play is a goal.

It will also please Guardiola that the 21-year-old has looked equally at ease on either wing.

Nolito is a player who holds his position really well on the left. Rarely drawn in-field, the new signing has a knack of finding space inside the box to score goals. Of the trio, he’s the most natural finisher.

Navas is at home hugging the touchline. The Spaniard's assist for Paddy McNair’s own goal on the opening weekend stemmed from his willingness to stay wide and he is benefitting from being left alone in one-against-ones.

Sunday will be a big test for West Ham’s two Premier League rookie full-backs Sam Byram and Arthur Masuaku. If they don’t get support from team-mates, it will be a challenging afternoon.

City have passed their way out from the back quite beautifully in the first two matches of 2016/17. Showing real composure, the back five have used the full width of the pitch to give opposing front men the runaround.

Sunderland felt that pressing City’s rearguard would catch Guardiola’s men out as they looked to play clever triangles inside their own half, but the Black Cats' closing down wasn’t coordinated enough to succeed.

Flummoxed by the full-backs’ abnormal in-field positions, the Sunderland midfield weren’t sure whether to get tight to Gael Clichy and Bacary Sagna, or stay deeper with De Bruyne and Silva. The end result meant that their forwards’ press was bypassed with ease.

With City keeping the ball so immaculately, both of their opponents have found it extremely difficult to turn over possession in advanced areas.

How opponents have fared v Man City this term

The bravest tactic this weekend would be Noble and Kouyate squeezing up and pressure those inverted full-backs and it’s something they may choose to do at times.

My hunch is that Bilic will be a little more circumspect and resist the temptation to press high as a matter of course.

By staying goalside and letting City have the ball up until the halfway line, the Hammers could in theory successfully congest the middle third far better than Sunderland managed, packing the space that Guardiola wants to open up.

This mid-pitch press is even more effective when the centre-backs get tight to their front men and that’s something the Hammers duo did very well last time against AFC Bournemouth.

One of West Ham’s best strengths plays on a weakness of City and will be something to look out for at the Etihad Stadium.

Crosses aimed to the far post over the left-back’s head, have been a problem for the hosts, with Duncan Watmore and Phil Bardsley both almost capitalising from situations in the first two matches.

In the shape of Michail Antonio, the hosts have a specialist at punishing teams at the far post.

His headed winner from Gokhan Tore’s cross at the London Stadium last Sunday, was typical of the wide man’s contributions.

Last season he converted crosses at the far post against Liverpool (twice), Aston Villa and Everton and he also bundled home a long throw that had reached him deep inside the box at home to Manchester City.

Whenever Tore, Payet or Masuaku flight deliveries into the 18-yard box, keep your eye on Antonio attacking the ball inside the danger zone. Tall and powerful, he is not an easy man to stop.

I can see this match being won or lost in central midfield.

Will Silva and De Bruyne’s movement tie Noble and Kouyate in knots and push them backwards all game long? Or can the Hammers pairing hold their own and run City’s attack-minded duo into areas they’re not so comfortable in?

The answers could be decisive.

When Jack Rodwell stepped forward to lay on his assist for Sunderland's Jermain Defoe in Matchweek 1, De Bruyne’s marking was found wanting.

It’s vital Bilic’s men try to be proactive and play inside the final third when they get the chance. City are light on defensive players in the starting XI.

The hosts will work the Hammers extremely hard. Fit, eager to impress and full of running, they ran 116.89km against Stoke City. That distance eclipsed their best of last season and also beat their highest total in a 2015/16 away game by 3km!

Depleted West Ham are huge underdogs against a side brimming with confidence, but if they grasp their opportunities to attack, don’t rule out another shock result.