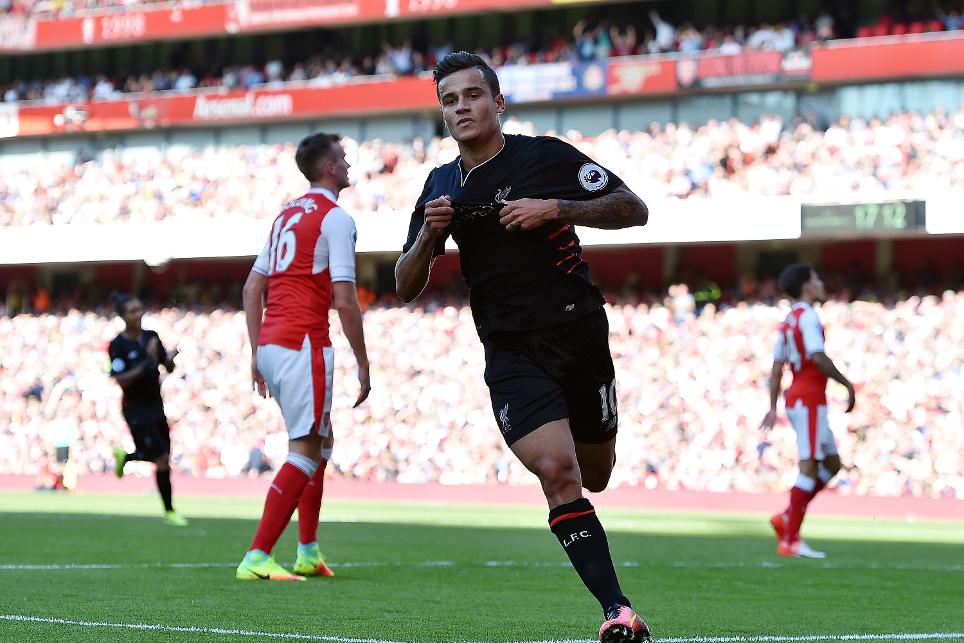 Liverpool got their 2016/17 Premier League campaign off to a wonderful start by edging a pulsating encounter at Emirates Stadium winning 4-3 at Arsenal.

Despite falling behind to Theo Walcott’s strike, Jurgen Klopp’s side raced into a 4-1 lead thanks to a Philippe Coutinho brace and goals by Adam Lallana and Sadio Mane. With the Merseysiders threatening to run riot, the Gunners responded with two efforts of their own from Alex Oxlade-Chamberlain and Calum Chambers, but the visitors held on for a memorable victory in north London.

On 28 minutes Arsenal were awarded a penalty for a foul by Alberto Moreno on Walcott, whose feet were too quick for the Spaniard’s lunge, but Walcott was denied by Simon Mignolet, who guessed right to parry the ball away.

However, Walcott soon made amends, latching on to Alex Iwobi’s pass to drive low across Mignolet.

A minute into stoppage time at the end of the first half Coutinho provided a moment of magic, curling free-kick into the top left-hand corner of Petr Cech’s net from 30 yards out

Lallana gave Liverpool the lead four minutes after the restart by chesting down Georginho Wijnaldum’s cross and slotting past Cech, and six minutes later it was 3-1 to the visitors as a delightful team move found Nathaniel Clyne haring down the left and picking out Coutinho to score again.

Summer signing Sadio Mane scored a wonderful individual goal on 63 minutes, powering down the right, cutting inside three players and firing into the top corner.

But Arsenal would not lie down. Alex Oxlade-Chamberlain gave the home fans faint hope with a lovely individual goal which left four opponents in his wake and Mignolet fooled by a low shot on 66 minutes, and 11 minutes later Chambers rose to glance in Santi Cazorla’s free-kick.

However, the Gunners could not match Liverpool’s four goals.