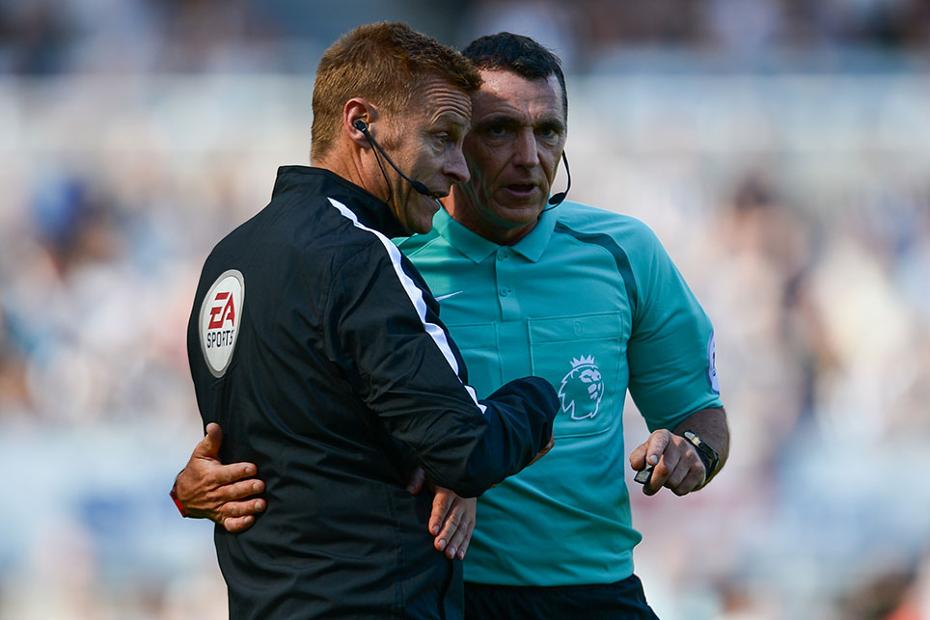 Match officials appointed for Matchweek 38
Onside with Carragher and Neville
What is it really like to be a referee?

Both referees will continue to work for PGMOL, with particular focus on the continued Video Assistant Referee trials in the English game.

Jones' 202nd and final Premier League match was West Bromich Albion’s 1-0 win against Tottenham Hotspur at The Hawthorns, although his last involvement will come at Anfield for Liverpool’s encounter with Brighton & Hove Albion on the final day of the season, where he is Fourth Official.

The 50-year-old plied his trade as a Football League referee for 11 years before he was added to the Select Group in 2008 and began officiating in the Premier League. After Sunday, he will have been involved in 1319 professional matches.

Swarbrick’s final appearance in the middle was at Wembley Stadium on Wednesday night, when he officiated Spurs' 1-0 win against Newcastle United, his 131st Premier League match.

His final involvement will come at Old Trafford for Manchester United’s meeting with Watford, where he is Fourth Official.

Despite being a relative latecomer to refereeing – he started at the age of 29 – Swarbrick, 52, enjoyed a rapid rise through the ranks, regularly officiating through the Football League before joining the Select Group in 2011.

Jones said: "I've enjoyed every minute of my refereeing career – when I passed my referee exams 35 years ago I would never have dreamed that I would still be going today, and it’s been a huge honour to referee through the Football League and eventually in the Premier League.

"I will miss the excitement of running out at the best stadiums in the country, with the best seat in the house, but I’m looking forward to seeing what the future holds. I am also so grateful for the support from my family and friends over the years.”

“Refereeing is a huge passion of mine and something I have been lucky to do for a number of years," said Swarbrick. "I feel that the referees in England are some of the best in the world, and I have every confidence in their continued success.

"I’ve been lucky to achieve what I have done in my refereeing career, particularly after taking it up relatively late, and I owe a lot of thanks to PGMOL.

"To finish at the home of English football, with my family in the crowd, was a huge honour and something that I’ll always remember."

Mike Riley, the General Manager of PGMOL, the referees' body, said: "Mike and Neil have been fantastic match officials and have made a significant contribution to the Premier League.

"Their longevity and professionalism is to be admired and I thank them for their commitment, and wish their families continued fulfilment and a happy future.

"While their on-field refereeing careers may have come to an end, we are excited about what the future holds for them, as they continue their careers with us."