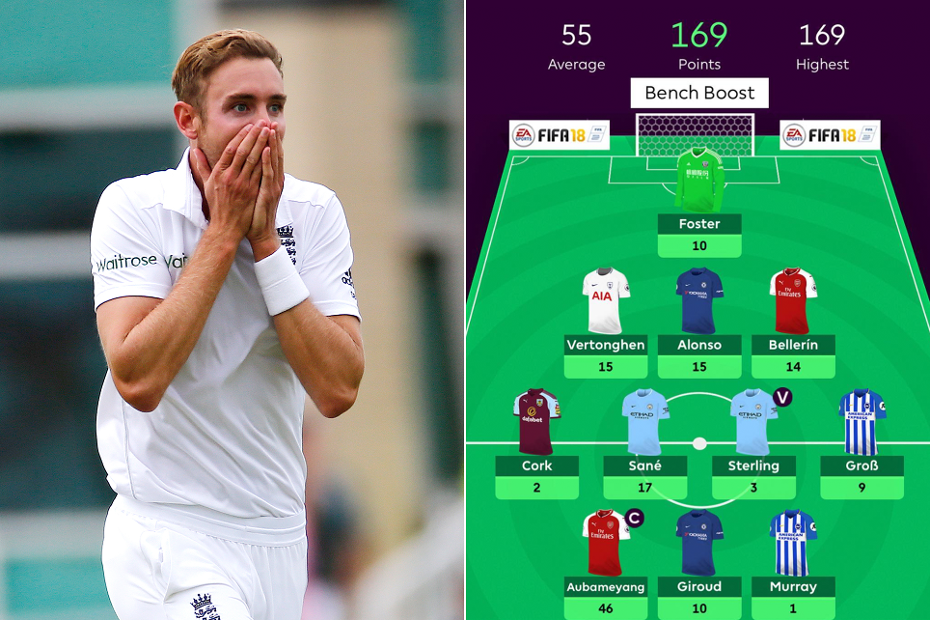 Stuart Broad touched sporting greatness with his eight Ashes wickets in 2015, but the England cricketer says his Fantasy Premier League performance this Double Gameweek has run it close as an achievement.

And he was proud to share his performance on social media.

I enjoyed 8-15 in the Ashes but leading GW37 in #EPL Fantasy Football runs it close as a sporting achievement! #fantasyfootball

Broad made the shrewd decision to captain Pierre-Emerick Aubameyang (£10.7m), who earned him 46 points with three goals and an assist for Arsenal against Burnley and Leicester City.

His total was also aided by good use of his Bench Boost chip that has brought him 27 points so far.

By coincidence, 169 is an auspicious number for Broad. That is also his highest score as a batsman in Test cricket, getting 169 runs for England against Pakistan in 2010.

But, with one match to go in the Gameweek, Broad will be looking to add to it because his position at the top of the weekly rankings is not secure.

Having West Ham United goalkeeper Adrian (£4.0m) on his bench could help boost his total against Manchester United this evening and earn him the Manager of the Week award.

That would win him a copy of EA SPORTS' FIFA18, a Nike Ordem V matchball, an FPL rucksack, an FPL mug and stress ball.