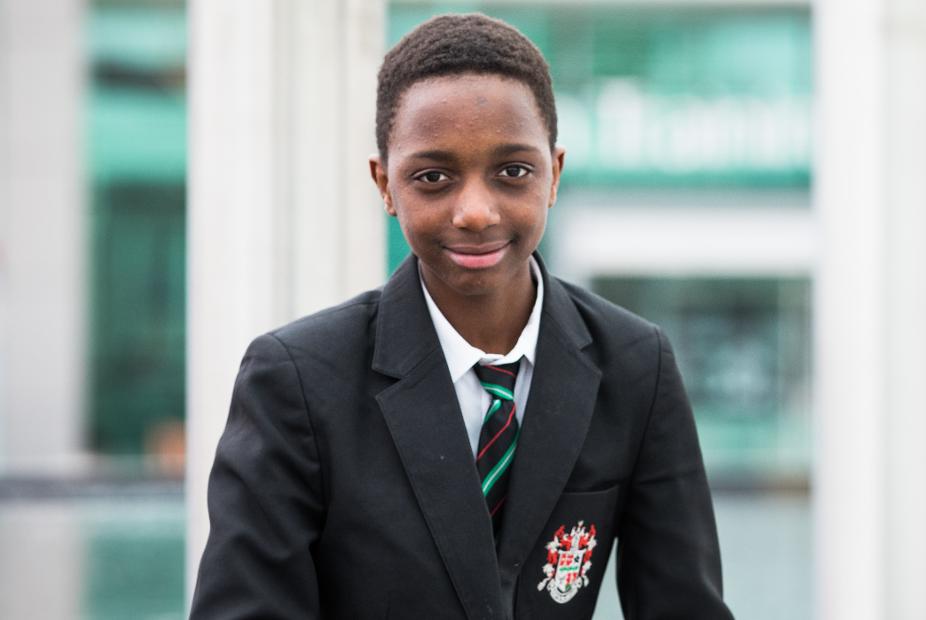 Meet Fortune. Twelve years ago, he was born in Johannesburg, South Africa.

He was named after the South African football legend and former Manchester United player Quinton Fortune.

But, as a very young boy, his mother left him to find work in the UK. Fortune had to move to Zimbabwe to live with his uncle.

In Zimbabwe, Fortune suffered poor treatment at home and at school. But a few years later he was able to be reunited with his mother when he moved to England.

“I was happy to see my mum but I didn’t know who she was so I was in the middle, confused,” he says.

After his experiences in Zimbabwe, he was also worried about life at school in England.

"I used to watch lots of high school movies and people get bullied there so I thought, 'I’m going to get bullied,' " he says. “I thought I was going to be one of those kids in the movies.”

But then, by coincidence, United came to the rescue.

Pearce helped Fortune to join the football team and got him involved with assisting younger children at primary school sessions. This was all to build Fortune's self-belief.

"Nick started teaching me to have lots of confidence in myself,” says Fortune. "I’ve become a bit brave and nowadays people around me are friends with me and talk to me.”

Meet Quinton Fortune. As a teenager he also made the long journey from South Africa to the UK.

This was in the hope of becoming a professional footballer. Quinton had to leave England and move to Spain to achieve that dream, playing for Real Mallorca and Atletico Madrid before returning to England to join United.

Now, 40, Quinton is a United ambassador and the club arranged for him to meet his younger namesake at United’s AON Training Ground as a reward for Fortune's progress at Middleton.

“We have the same background and lots in common,” Fortune says. “We’re both left-footed and left-handed and also like the same subjects at school.”

“It feels like meeting myself,” Quinton says. “We have had a similar experience because I came over from South Africa when I was 14, and we’ve both had to learn a different language.”

Fortune also got to meet Juan Mata and Ander Herrera, who presented him with gifts.

“It means a lot to me because I think my coach and teachers chose me because of my behaviour in classes and determination,” Fortune says.

“I feel proud of myself that I’ve developed from how I was before.”