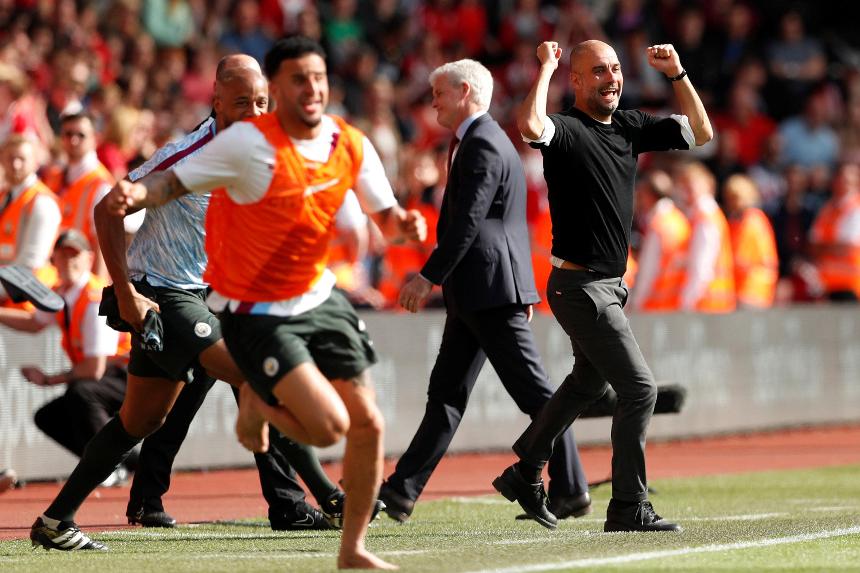 Not only are Manchester City the best Premier League team of 2017/18 they have blazed a trail to set marks unmatched in the 26 seasons of the competition.

Here we look at the Premier League records they have broken or matched on their way to the title.

City's claiming of the title with five matches to go equals the record that was set by Manchester United in 2000/01.

City finished 19 points clear of Man Utd, whose record they have broken. United ended 18 points clear at the top in 1999/00.

The 18-match winning run that City enjoyed between victory at AFC Bournemouth on 26 August and the 1-0 win at Newcastle United on 27 December broke two records: the record of 13 consecutive wins in the same campaign, held jointly by Arsenal (2001/02) and Chelsea (2016/17); and Arsenal's overall record of 14 consecutive league victories, achieved between February and August 2002.

Most consecutive away wins

The victory at Newcastle was also City's 11th away win in a row, a sequence that started on 21 May last season. That matched the record set by Chelsea between 6 April 2008 and 7 December 2008.

City had 82.13 per cent of possession at Everton on 31 March, the highest by an away team in a PL match since these records began.

City were behind in matches for a total of only 153 minutes, the fewest by a side in a single campaign.

Most successive Manager of the Month awards

Guardiola was named Barclays Manager of the Month four times in a row between September and December, a first.

Quickest to a century

With their four goals against West Ham United, City recorded 102 goals in 35 matches, the quickest a Premier League side has reached a century of goals in a single campaign. It is the fourth time 100 goals has been scored in a PL season, following Chelsea in 2009/10 and Man City and Liverpool in 2013/14.

City are the only team in English top-flight history to reach 100 points in a single season. They reached that century with a stoppage-time winner at Southampton, which came after they beat Brighton & Hove Albion in their previous match to break Chelsea's record of 95 points set from 2004/05.

With the final-day win over Southampton, City also surpassed Chelsea's 48 away points picked up in 2004/05. Pep Guardiola's side finished on 50 points on their travels.

That victory over Saints was City's 32nd of the campaign, moving them further ahead of the mark of 30 recorded by Chelsea last season. Man City are the first team to win 32 matches in a single English top-flight season.

Jose Mourinho's Chelsea of 2004/05 won 15 matches away from home, another feat that City surpassed on the final day with their 16th away victory.

City's goal difference of +79 is eight better than the previous best set by the Chelsea team of 2009/10 who finished with +71.