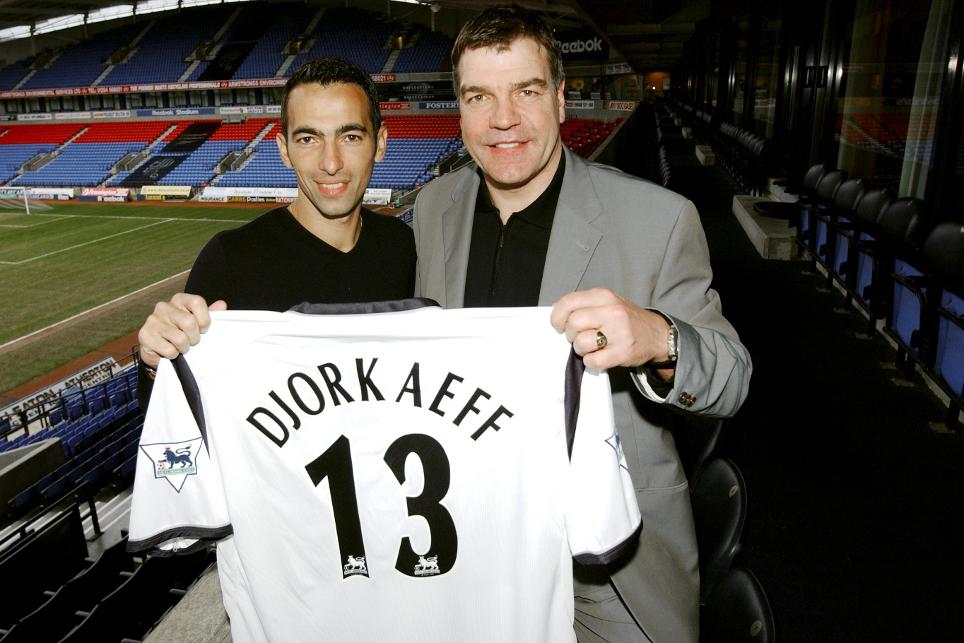 With Sam Allardyce taking over as England manager following a successful spell at Sunderland, we look back at when he revealed to premierleague.com his best XI of players he has managed during his 467 matches in the Premier League.

Each of the four clubs managed by Allardyce prior to Sunderland - Bolton Wanderers, Newcastle United, Blackburn Rovers and most recently West Ham United - are represented.

But his team is dominated by players from Bolton, including all three midfielders, where he led the Lancashire side to four successive top-eight finishes and European qualification during six years in the top flight.

Goalkeeper: Jussi Jaaskelainen (Bolton)
Allardyce: "Because of his outstanding contribution to the best football history records of Bolton Wanderers. The amount of time he played for me ultimately resulted in getting to a [League] cup final, qualifying for Europe and finishing eighth, sixth, eighth and seventh in successive seasons. He played every game nearly, never getting injured. It was a close call with Shay Given at Newcastle, but I wasn't there that long, and Adrian, who hadn't been that long at West Ham and had taken Jussi's place."

Right back: Habib Beye (Newcastle)
"Right-back was a tough choice. Habib Beye, who I took to Newcastle after being Marseille captain, was one of the best players to have adjusted to the Premier League. He finished player of the year in his first season. That meant he just pipped Michel Salgado, who I got from Real Madrid at Blackburn. Michel was at the latter stage of his career so Habib just edged him."

Centre-back: Winston Reid (West Ham)
"I chose Ryan's partner at New Zealand, Winston Reid. He was what everybody seems to forget - the same with Ryan Nelsen - that central defenders are there to defend. They're not there to be ball players. They're there to be out and out defenders and these two are outstanding defenders. They could certainly handle the ball, but the main priority was that they were able to cope with the quality of the Premier League, read dangerous situations, nullify top players from around the world, and they're a good combination."

Left-back: Ricardo Gardner (Bolton)
"Ricardo was a young Jamaica international who joined in 1998. He was a left winger when I got to Bolton but we had an injury problem and converted him to left-back. He had four seasons there where we finished eighth, sixth, eighth and seventh. His outstanding contribution to Bolton at that time was similar to Jussi's."

Central defensive midfielder: Fernando Hierro (Bolton)
"This guy was world-class. I was fortunate to work with world-class and he was outstanding in the year we finished sixth and got into Europe. His all-round ability, he was top quality in everything. You name it, he was exceptional at it."

Right central midfielder: Jay Jay Okocha (Bolton)
"The best entertainer in the Premier League at the time. He is so good they named him twice! He was an outstanding entertainer, an outstanding captain. He could speak four languages. He took on board what the manager wanted, in terms of the tactics, to try to win a game and imposing himself. He commanded a huge amount of respect from every player that played with him."

Left central midfielder: Gary Speed (Bolton)
"It was difficult not to pick Kevin Nolan for obvious reasons, but I went for Gary. The combination of the three would tantalise any midfield in the Premier League today, if they were together in their prime. All three didn't play together because Gary came just after Fernando left. He was Mr Dependable as well."

Right forward: Stewart Downing (West Ham)
"I selected Downing on the right coming in, joining up with the front man. I changed how he played but if you look at most of his career he's always played in that position. We moved him into the middle at West Ham, but with this front three it would be impossible to play him there. He can handle the ball, his workrate is exceptional, his quality of crosses is a different class. He has natural ability and is an exceptional player."

Centre-forward: Nicolas Anelka (Bolton)
"He had pure pace, touch, skill, ability, goals. His attitude was no problem at all; he was as quiet as a mouse."

Left forward: Youri Djorkaeff (Bolton)
"I have picked another world-class player in Youri Djorkaeff, coming in off the left. His nickname was 'The Snake' because you never knew when he was going to strike. That came from Arsene Wenger by the way!
"Youri was top-class, a brilliant human being as well as a brilliant footballer. He knew how to set the standards. He used to get very upset about the lads not training correctly, or not hitting the standards he was looking for, and he had a terrific three years with us at Bolton."